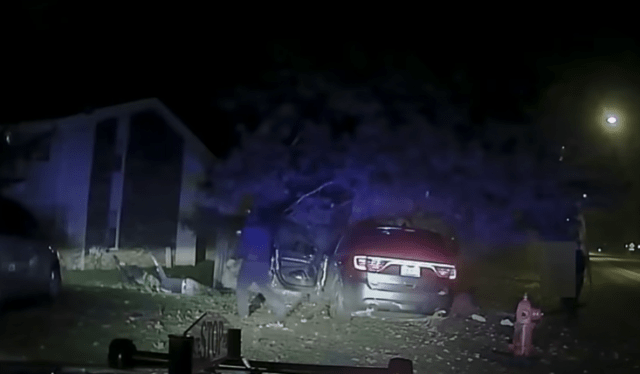 LANSING, Mich. — A trooper of the Michigan State Police has been charged with felony assault in connection with a fail-to-yield traffic crash where he directed his K9 to remain on the bite for several minutes during the capture of the driver.

Parker Surbrook, a trooper assigned to MSP’s Lansing post, is on unpaid leave while the charges play out in court. He was also removed from the K9 unit, Lansing State Journal reported.

The charge relates to a Nov. 13 arrest in Lansing, according to an MSP press release. Surbrook was involved in a “pursuit and arrest incident” on a vehicle leaving an “illegal activity spot” where the passenger was believed to be armed, according to the MSP report. The suspect vehicle crashed without yielding.

Surbrook worked with the Lansing Police Department Secure Cities Partnership and on the Violent Crime Impact team. He was working with VCI during the arrest in question.

The driver fled and crashed the vehicle into a tree. The driver was out of his vehicle when Surbrook and an undercover officer from the Lansing Police Department arrived at the collision scene. As a result, Surbrook deployed K9 Knox in order to safely apprehend the suspect. Knox remained on the apprehension bite for several minutes at the direction of Surbrook, according to the video.

“Surbrook’s actions during this incident, which were captured on his patrol vehicle’s in-car camera, were not in keeping with the standards of professional conduct expected by members of the MSP, nor do the totality of his actions fully align with training and policy for canine handlers,” according to the MSP release.

MSP released the dash-cam video and the full investigative report on the incident.

The driver said “I’m done, I’m done” and made no attempts to get up. Surbrook keeps yelling “stop him” as Knox bites and grabs the man.

The driver tried to get up from his knees, but stumbled back to the ground, according to the police report. The report noted he appeared disoriented and was not resisting or fleeing, according to the Lansing State Journal.

The driver screamed in pain and yelled, “He’s got me…he’s got me,” according to the video. He repeats himself and Surbrook tells him not to move.

The passenger from the vehicle was contained by the undercover officer, who had his Taser pointed at him. The officer deployed the Taser, which didn’t appear to be effective. Surbrook went over to them and pointed his gun at the passenger, according to the Journal report.

Surbrook paced as he waited for backup to arrive. He sounded stressed and frustrated, the MSP report noted. He was visibly frustrated as he opened the undercover officer’s car to put the recovered gun inside and slammed the door so hard it rebounded back open.

The man said, “I’m not moving, please get him,” begging Surbrook to call off Knox.

He starts pleading, “please sir…sir,” and Surbrook tells Knox “good boy” and “stay on him.”

The MSP report noted the driver didn’t appear to be moving aggressively toward Knox and was only physically reacting to being pulled and grabbed by the K9. At times, Knox was licking the driver’s wounds and not biting him, according to the report.

Another officer arrived and helped Surbrook handcuff the driver.

Surbrook’s supervisor, Lt. Ryan Maki, said Surbrook’s statements and report after the arrest “led him to believe the suspect had ran on foot and that K9 Knox was deployed to perform the chase and hold to stop the suspect as he was running.” After watching the video, Maki said Surbrook’s report didn’t completely document what happened and “lacks significant details of the incident.”

The driver told the MSP investigator that when he tried to get out of the vehicle, his leg hit the ground and he fell. He said he could not walk and did not run. He said Knox tore off his sweatshirt. All his clothes were torn up and had blood on them.

The hospital documented bite injuries to his head, left shoulder blade, left bicep, left forearm, left-side rib area, both sides of his pelvic bone area, his genitals and the top of his thighs.

The lead trainer of MSP’s K9 unit, Sgt. David Yount, told investigators it was within policy and training to keep Knox deployed on the driver until the second suspect was handcuffed. He said, however, Surbrook should have worked with the other officer to get the driver cuffed after the passenger was secured.

Yount said this was the first time there has been an issue with Surbrook and Knox. He said the driver’s injuries didn’t appear egregious, as they didn’t have excessive tearing of the skin and didn’t require stitches.

MSP became aware of the incident Dec. 4 during a routine review, according to the release. A supervisor reviewing the video filed a complaint with the department professional standards section, and Surbrook was placed on leave several days later. A criminal investigation later began, Lansing State Journal reported.

“The Michigan State Police is an agency that prides itself in our troopers’ abilities to react with calm and confidence even in the most dangerous and harrowing of circumstances,” Col. Joe Gasper, director of MSP, said in a statement. “While the unfortunate reality for police officers is that use of force is sometimes a necessary action to ensure the protection of themselves or others, care and concern for human life should always be at the forefront of any police officer’s actions. This makes Trooper Surbrook’s disregard of the driver’s pleas for help totally unacceptable.”

Surbrook joined MSP in October 2012 and became a canine handler in June 2017.