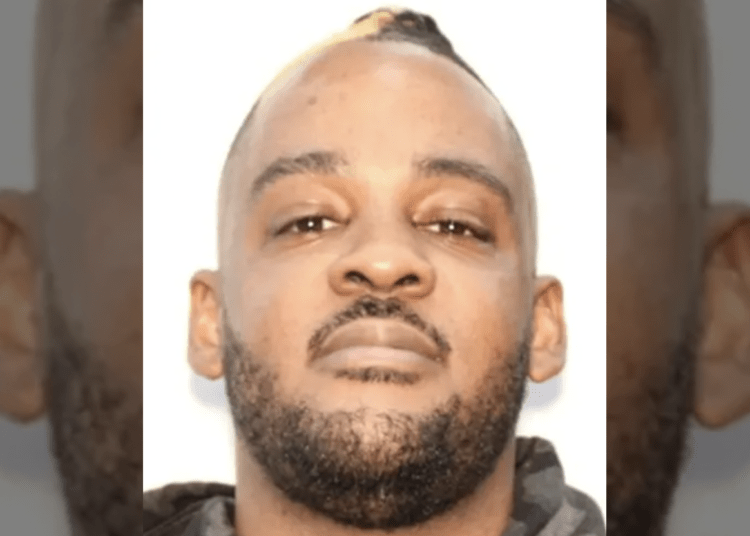 Someone from the community called to report a suspicious individual, which turned out to be Edward Allen Gatling, Fox5 Atlanta reported.

Law enforcement personnel swarmed the area as they pursued the wanted man Wednesday afternoon into wooded terrain near the initial incident.

There was an exchange of gunfire and Gatling, 38, was killed. No deputies were injured during the gun fight.

The gunfire unfolded at a residence in Lithonia about 7:30 a.m. on Wednesday. The sheriff’s office confirmed that the shooting took place on Wellington Circle as the deputies were trying to serve an arrest warrant for aggravated assault with the intent to murder.

Officials say the suspect shot through the door of his home, injuring the deputies. Sheriff’s personnel did not return fire, Fox5 reported.

Both of the deputies injured in the shooting are “reported to be conscious and alert,” the Sheriff’s Office told the news outlet.

Officials have identified the suspect as 38-year-old Edward Allen Gatling. He is described as 5-feet-11-inches tall with a weight of 280 pounds. He was last seen wearing a red jacket. A $20,000 reward is being offered for information leading to his arrest, according to DCSO.

“Mr. Gatling, Edward Gatling, I know you are out there, you will be brought to custody, you will be taken in. We will not tolerate this,” DeKalb County Sheriff Melody Maddox said.

One deputy suffered a gunshot wound in the abdomen and the other sustained a hit to the leg. Both were transported to Grady Hospital where one is in surgery and the other is in stable condition.

The deputies have been identified as Deputy Aaron Jackson and Deputy Jared Hunt. Both are veteran deputies, Maddox offered while providing an update on their conditions, according to Fox5.

“We will not stop today until we find the individual that has caused harm to our investigators,” said Chief Randy Akies with the DeKalb County Sheriff’s Office.

Both of the deputies injured are “conscious and alert,” Akies also said.

Meanwhile, in nearby Clayton County, an officer was killed and a second wounded during shootings late Tuesday, the police department said.

Clayton County Police Chief Kevin Roberts said early Wednesday that Officer Henry Laxson was one of four people killed in the series of crimes which began around 8:40 p.m. in the unincorporated community of Rex. The suspect is also among the dead, AJC reported.

The police agency received several 911 calls reporting domestic violence on Jervis Court, where a woman was found motionless in a yard and a boy had been shot nearby. Responding officers found themselves under gunfire, department spokeswoman Sgt. Julia Isaac said.

“While trying to locate the juvenile victim and render aid to the female victim, officers received fire from an unknown location,” Isaac said in an emailed statement to the news outlet.

A 12-year-old boy who suffered a gunshot wound to the face led officers to a specific home, Roberts said. As police approached, a male suspect fired at officers before turning and running to the rear of the residence, the chief said.

At the back of the home, the suspect engaged additional officers in a shootout, the chief said.

Sound On: A neighborhood just shared with me ring doorbell video, you can hear the barrage of gun fire that echoed in this Clayton Co neighborhood. Two officers were shot and taken to area hospital. Stay with @wsbtv for the latest pic.twitter.com/l5Rpp2o215

Laxson was shot during the gun battle, although his location at the house was unclear. He was rushed to Piedmont Henry Hospital but did not survive.

The suspect was also killed in the shootout. Investigators believe the man killed two women early Wednesday, the chief said.

The names of the suspect and victims have not been released.

“These men and women do an honorable job every day, and it’s unfortunate that we have to make these reports time and time again,” Roberts said. “My heart aches for every police officer and their family that goes through these types of things. These things just shouldn’t happen.”

During the exchange of gunfire, Officer Alex Chandler sustained a gunshot wound to the hand, according to police.

The wounded boy is listed in critical condition at a nearby hospital.

The Georgia Bureau of Investigation confirmed it is handling the officer-involved shooting, and Clayton police are investigating the domestic violence that spurred the double homicide and critical wounding of the child, AJC reported.

“Officer Henry Laxson was one of Clayton’s finest and unquestionably our very best. Laxson far exceeded all expectations of what an ideal police officer should be,” Hill wrote. “I will greatly miss your smile young man. Rest easy son, the brotherhood will continue the watch from here”.

Laxson is the third Georgia police officer killed in the line of duty in 2021, according to AJC.