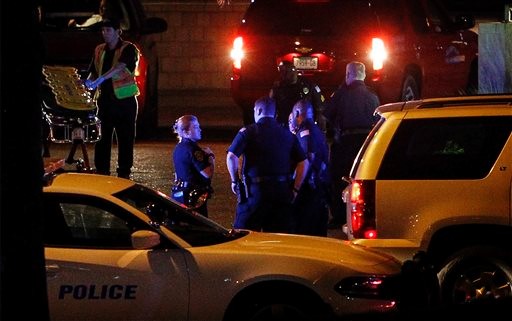 MEMPHIS, Tenn. (AP) — A manhunt was underway Monday for a man who police say fatally shot a Memphis officer after he interrupted a drug deal involving a small amount of marijuana that would have resulted in just a misdemeanor citation and a fine.

"He's a coward," Memphis Police Director Toney Armstrong said of the suspect, 29-year-old Tremaine Wilbourn. "You gunned down, you murdered a police officer, for less than 2 grams of marijuana. You literally destroyed a family."

Wilbourn faces a first-degree murder charge in the death of Officer Sean Bolton, 33, Armstrong said at a Sunday news conference.

Wilbourn was a passenger in a 2002 Mercedes Benz that was parked illegally in a southeast Memphis neighborhood Saturday night, Armstrong said. Bolton saw the car and shined his squad car's spotlight on the vehicle, according to the director.

Wilbourn took out a gun and fired, striking Bolton multiple times, Armstrong said. The officer died at a hospital.

Wilbourn and the driver then ran away, Armstrong said. The driver later turned himself in to police, and police described him as a person of interest in the case before he was released without being charged.

Armstrong said Bolton interrupted a drug deal in progress. Officers found about 1.7 grams of marijuana in the car, Armstrong said.

The U.S. Marshals Service has offered to help in the search for Wilbourn, who Armstrong described as armed and dangerous. He said Wilbourn was on supervised release after serving a federal sentence for robbery of a banking institution.

Earlier Sunday, police officers wearing protective vests descended on an apartment complex in southeast Memphis, about three miles from the scene of the shooting. An armored truck and a mobile command center were among the police vehicles there.

Officers could be seen going in and out of a sliding door and onto a balcony on the second floor of the two-story building.

Bolton is the third Memphis officer to be fatally shot in slightly more than four years. Officer Tim Warren was killed while responding to a shooting at a downtown Memphis hotel in July 2011. In December 2012, Officer Martoiya Lang was killed while serving a warrant.

Memphis Mayor A.C. Wharton Jr. said Bolton's death "speaks volumes about the inherent danger of police work" and asked others to "pray for the family and pray for our city."

During past police shootings, both Wharton and Armstrong have said too many violent criminals are out on the street and have easy access to guns.

Bolton was a former U.S. Marine and served a tour of duty in Iraq, police said. He joined the department in 2010.

Jason Mendoza, a minister at Woodland Presbyterian Church, said Bolton served as the best man at the wedding of his brother, Brian Bolton, this summer. Church member Pam Haley said Bolton's father died about a month ago. Brian is a member of the church.

During the church's morning service, Mendoza asked worshippers to pray for the Bolton family.

"Lord, lift up Brian and his family," Mendoza said.

Share and speak up for justice, law & order...
Tags: General NewsNewsOfficer Down