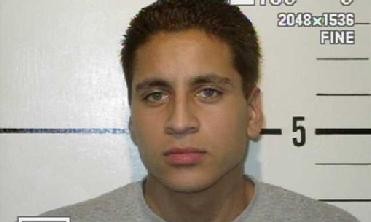 MOUNT AIRY, N.C. Police arrested a convicted kidnapper early Monday in the fatal shooting of four men in a parking lot in the town that inspired the idyllic community of Mayberry on the 1960s TV series "The Andy Griffith Show."

Marcos Chavez Gonzalez was charged with four counts of murder in the slayings late Sunday outside a TV store in Mount Airy, about 100 miles north of Charlotte, Mount Airy police said.

The town with a population of approximately 8,700 is the hometown of Andy Griffith. It has built a tourist trade on nostalgia for the show that continues to thrive in syndication.

Police said Gonzalez was arrested without incident at a motel in Henry County, Va., about 50 miles northeast of the town.

Authorities received information about his whereabouts around 2:30 a.m., according to a statement. Details haven't been released.

Gonzalez, 29, was being held in the Henry County jail, though it wasn't clear whether he had an attorney, jail workers said.

He also was charged with being a fugitive from justice from North Carolina, and will be held in Virginia pending an extradition hearing.

Mount Airy Police Chief Dale Watson said at a news conference Sunday that the victims were shot outside Woods TV, less than a mile from the police station. He said the victims and the suspect were at the store for a reason.

"We don't feel this was a random event," Watson said. "We do have an idea why (they were shot), but we won't be releasing that."

Alerts were issued in North Carolina and Virginia to be on the lookout for Gonzalez after the shootings.

Nursing supervisor Sue Coe at Northern Hospital of Surry County confirmed that two people died at the store around 2:30 p.m. Sunday. She said two who were wounded died at the hospital, just across the street from the store. Woods TV sells televisions and satellite systems.

Police said the victims' names were being withheld because their families have not been notified. Watson said all four were from Surry County, which includes Mount Airy.

WXII-TV in nearby Winston-Salem reported that people who knew the victims gathered near the store Sunday and began crying and collapsing to the ground.

Law Officer is the only major law enforcement publication and website owned and operated by law enforcement. This unique facet makes Law Officer much more than just a publishing company but is a true advocate for the profession.
Tags: InvestigationsNews