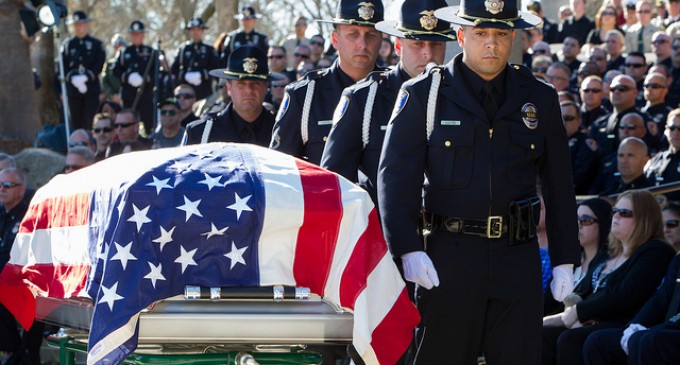 While hate-crime laws often refer to ethnicity or disability or gender, Louisiana is about to do something different. The Washington Post reports that the state is poised to become the first in the nation where public-safety personnel will be a protected class under hate-crime law — a move that comes amid a simmering national debate about police shootings and whether that debate has given rise to an anti-law-enforcement climate.

The Louisiana legislation has been referred to as “Blue Lives Matter” — a phrase popularized in response to the Black Lives Matter movement, which exploded following the fatal 2014 police shooting of an unarmed black teenager, Michael Brown, in Ferguson, Mo.

Black Lives Matter activists have protested what they deem as excessive force by police, and they have called attention to specific instances in which police shot unarmed civilians.

But those who respond with “Blue Lives Matter” argue it’s officers who are under assault — that criticism of police fosters animosity toward law enforcement.

Louisiana House Bill 953 faced little opposition from lawmakers; the House passed it 91-0, and the state Senate approved it 33-3. The bill now heads to the desk of Gov. John Bel Edwards (D).

No other state includes police officers as a protected class under hate-crime laws, according to the National Conference of State Legislatures. But at least 37 states — including Louisiana — have enhanced penalties for assaulting police officers.

Edwards, the Louisiana governor, is expected to sign the “Blue Lives Matter” bill into law as early as next week.

There has been criticism of the measure outside of the state Capitol. The New Orleans chapter of activist group Black Youth Project 100 has called on Edwards to veto the bill arguing that citizens, not police, are under assault.

“By treating the police as specialized citizens held above criticism and the laws they are charged to enforce, we lose our ability to exercise our First Amendment right,” the organization said in a statement. “Including ‘police’ as a protected class in hate crime legislation would serve to provide more protection to an institution that is statistically proven to be racist in action, policy, and impact.”