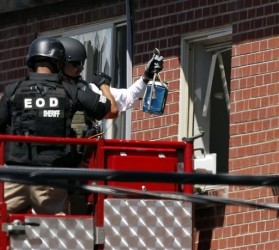 As more details are coming out of Aurora, it appears that James Holmes may have had a plan to take out some police officers.

The first dispatch went out at 0039 hours, sending officers to the theater on a report of at least one shooting victim but with “hundreds” running around. By 0106 hours, police were releasing the name of James Holmes as the shooter. As a result of that contact, officers evacuated the complex where Holmes lived due to concerns there might be explosives in his apartment. This action probably saved numerous lives.

A neighbor living below Holmes had heard very loud music come on at midnight, about a half hour before the shooting began at the theater. The music had a very heavy beat and was quite annoying, something that the neighbor, Kaitlyn Fonzi, described as being very unusual for the otherwise quiet complex.

In an interview with Fox News, Fonzi said she eventually went upstairs intending to tell the occupant to turn off the music. There was no response and she touched the door knob, sensing it was unlocked. She thought about opening the door and calling inside but said she thought better of it and yelled out that she was going to call the police. Not opening the door probably saved Fonzi’s life. According to Fonzi, the music abruptly ended at 0100, as if it had been on a timer.

When officers got to the complex, they determined that Holmes’ apartment was filled with explosive devices and tripwires to activate the devices when the door was entered. Bomb experts worked diligently to disable the trip wires, using small remotely-detonated explosive charges. After this was done, a larger “water bomb” was used to further disrupt and disable the explosive potential of the items in the apartment.

As I write this, efforts continue to get into the apartment in order to both render the area safe and to recover evidence related to the crimes perpetrated by Holmes. The oppressive heat was making the use of a heavy bomb suit impossible.
Having closely watched this incident unfold and considering every available piece of information, I believe that Holmes had a plan to take on cops and inflict significant losses to public safety. I’ll summarize my theory based on the information thus far.

See if you agree with my assessment.

The music was designed to generate a complaint to police or, at the very least, a response from an irritated neighbor. Holmes was probably banking on curiosity causing whoever came to the door to try and open it. Had this occurred, a very large explosion would have taken place. This explosion would occur just before or during his shooting rampage. This would cause a delayed or diminished response to the theater.

The fact that Holmes had armored up for his attack indicates that he was expecting someone to be shooting at him, probably the police. His armor included a ballistic helmet, tactical vest, throat protector, groin protector and leg protection. Had officers taken him on with handguns, he would have been very, very difficult to take down.

But it didn’t go down that way. Holmes exited the theater the same way he had come in – through an emergency exit door- and went to his car that was parked outside. Reports indicate that he was not armored up when police contacted him. What happened? No one knows for sure but it is likely that Holmes realized he might be able to escape and was in the process of trying to leave rather than engage with responding officers.

As I ran through this, I could not help but remember the terrible Columbine shooting that took place just a short distance from Aurora during 1999. The Columbine shooters tried to rig a large propane tank to explode and had also set up bombs in their cars to inflict injuries on those who would respond. The only thing that prevented the Columbine incident from having hundreds of victims was the ineptness of the bad guys.

Here’s the point and the takeaway: If you ever have the misfortune of dealing with an incident of this nature, give serious consideration to the potential for secondary and even tertiary attacks or explosions designed to inflict further carnage or target public safety. The people who have engaged in this type of activity have consistently shown some degree of fascination with the number of victims they can claim or for which they will be remembered.

Think proactively and always remember WIN – What’s Important Now? – as you work through the event. Doing so can help you stay ahead of the bad guy and can help save lives.