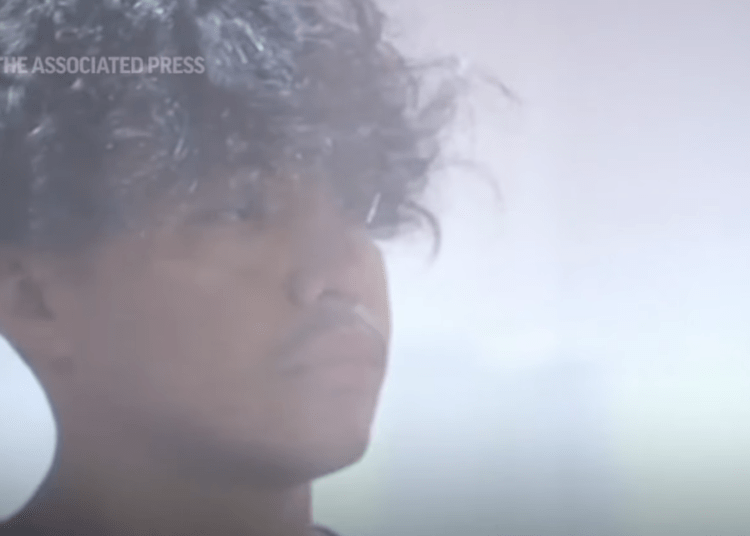 LAS VEGAS – The suspect accused of the mass stabbing rampage on the Las Vegas strip that killed two and wounded six others on Thursday was in the United States illegally and has a criminal record, according to reports.

Yoni Barrios, 32, is a Guatemalan national with a criminal record in California, a source with US Immigration and Customs Enforcement confirmed to Fox News.

Barrios was booked into jail on two counts of open murder with a deadly weapon and six counts of attempted murder as a result of the violent daytime attack.

Barrios had asked a group of women dressed as showgirls to take a picture of him while he held a knife. When they declined, he began his deadly stabbing frenzy, according to witnesses.

Maris Digionvanni, 30, was one of the two victims killed in the attack, the girls’ boss told the New York Post.

Barrios seemed “coiffured” and was “smiling and friendly” moments prior to the attack, said Cheryl Lowthorp, who runs Best Showgirls in Vegas, which employs the women.

“It just happened so fast; he stabbed Maris in the heart,” Lowthorp said of the horrific scene that occurred on Las Vegas Boulevard near the Wynn hotel.

The mass stabber told police that he “thought the women were laughing at him and making fun of his clothing,” according to a police report obtained by KKTV.

Barrios appeared in court Friday for a bail review. According to Clark County District Attorney Steve Wolfson, the accused killer will be formally charged with two counts of murder and six counts of attempted murder when he appears in court next week.

LAS VEGAS – The mass stabbing suspect said to be responsible for the deadly rampage in Las Vegas was arrested Thursday night hours after the attack, the Las Vegas Metropolitan Police Department said.

Police said the vicious acts began about 11:42 a.m. as they received reports of multiple victims having been sliced in front of a casino on South Las Vegas Boulevard.

Authorities did not immediately disclose details of the arrest other than saying, “Responding officers quickly identified the suspect in the area and he was taken into custody without further incident.”

“This was an isolated incident,” Deputy Chief James LaRochelle said in a statement. “All evidence indicates Barrios acted alone and there are no outstanding suspects at this time.”

The suspect is in custody after a stabbing that left 2 dead and 6 more injured. Click here for more: https://t.co/CLo48V7InD pic.twitter.com/wsRFoQoNkS

LaRochelle noted the initial stabbing appeared to be “unprovoked” on a sidewalk.

First responders were called Thursday to the scene on the Las Vegas Strip where 2 were stabbed to death and 6 are injured.  (Screenshot Fox 5 Las Vegas)

“Currently, three of them are in critical condition and the others are stable,” police added.

Detectives recovered a large kitchen knife they believe was the weapon used in the stabbings.

LaRochelle said there are “scores” of witnesses, so police are continuing to investigate the series of violent crimes based upon information that is gathered.

The motive remains unclear at the present time, while police have urged people to avoid the area directly outside the Wynn Hotel.

Some of the victims were showgirls taking pictures with tourists, bystanders told Fox 5 Las Vegas and other media outlets.

The suspect was subsequently followed by “concerned citizens” who called 911 for help, LaRochelle said.

At the outset of the investigation, authorities don’t believe Barrios is a local resident, the New York Post reported.

“This is clearly a tragic and hard-to-understand — hard-to-comprehend — murder investigation that deeply impacts our community,” LaRochelle emphasized.

Barios reportedly told a woman he was a chef and wanted to take a picture with some of the showgirls with his knife, but instead began his deadly attack when the group declined his request, the woman told a local news outlet.

A tourist from Montreal, Canada, told the Las Vegas Review-Journal that he saw “a lot of blood on the ground.”

Video posted to Twitter from the Las Vegas Strip showed paramedics urgently pushing a gurney with one victim on it wearing a red feathered skirt while nearby tourists looked stunned.

One of the victims of the mass stabbing on the Las Vegas Strip today. Two are dead. This video was shot by Pierre Fandrich of Montreal. More: https://t.co/v6L29iayAt pic.twitter.com/FGnysgk1NR

“This guy came, ran up, and started stabbing this lady in front of me and she ran around the escalators and she tried to get up under the bridge and her girlfriend was trying to help her,” witness Jason Adams told KLAS.

Lombardo said the area is safe and law enforcement officials would attempt to reopen it as soon as feasible.

“Our hearts are with all those affected by this tragedy,” Nevada Gov. Steve Sisolak said in a tweet. “At the State level, we will continue to work with partners in law enforcement to make resources available on the ground and ensure the Las Vegas Strip remains a safe and welcoming place for all to visit.”