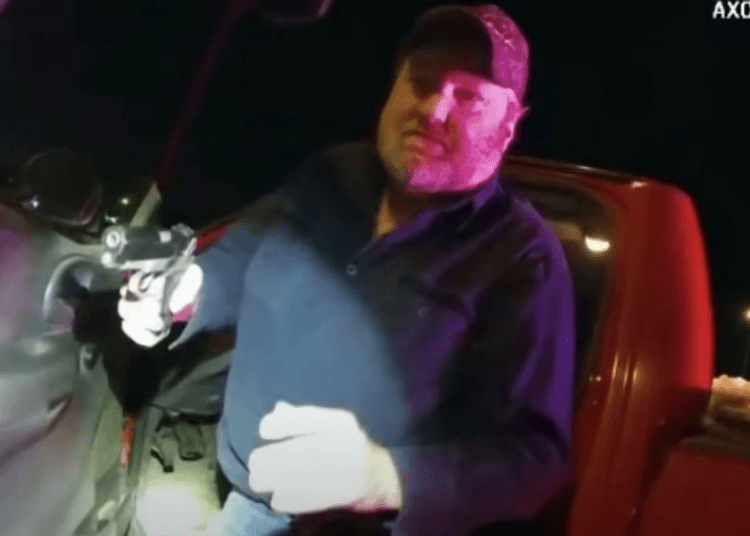 KENTON COUNTY, Ky. — A convicted felon in Kentucky apparently motivated to avoid a return to prison pulled out a handgun during a traffic stop and was fatally shot by officers, intense video shows.

Lockaby, a convicted felon in Pennsylvania, was getting out of his truck on Interstate 75 when he pulled out a gun and pointed it at Villa Hills Officer Sean Dooley, according to the clip and a letter sent by Sanders to Villa Hills police and Kentucky State Police, the Cincinnati Enquirer reported.

Lockaby then slowly exited his truck before pulling out a firearm with his right hand, according to released footage.

“I can’t,” Lockaby said as he brandished the weapon, causing a startled Dooley to take cover behind the man’s opened truck door as a second officer, identified as Jacob Bolton, opened fire, striking the gun-wielding suspect, video shows.

“God damn it,” a breathless Dooley told his partner. “Dude, he about shot me.”

Lockaby, of Manchester, Kentucky, was later pronounced dead at a hospital in Florence, the Enquirer reported.

“The officers’ use of deadly force has been ruled justifiable self-defense and defense of another pursuant to Kentucky law,” the attorney’s office announced Friday while releasing the 7-minute clip.

“Dude, he about shot me,” Dooley later told other responding officers at the scene. “We both fired.”

Sanders said Lockaby was initially pulled over for speeding, but his demeanor began to change once Dooley asked him to step out of his truck. Sanders has spoken with the man’s relatives, the Enquirer reported.

Randall Lockaby, who was barred from having a gun as a convicted felon, may have believed the officers were about to find the multiple guns he had inside his truck, Kenton County Commonwealth’s Attorney Rob Sanders said. (Villa Hills Police Department)

“They say this is very out of character for him, and our thoughts and prayers are with his family,” Sanders told the newspaper. “I don’t think this confrontation was anything anyone knew was coming other than Mr. Lockaby.”

Lockaby, who was barred from having a gun as a convicted felon, may have believed the officers were about to find the multiple guns he had inside his truck, Sanders said.

“Viewing these videos, it doesn’t take a prosecutor or even a licensed attorney to figure out this was a very justified use of force by these officers,” Sanders told the station. “They have a right to defend their own lives just like anyone else does in the Commonwealth of Kentucky. They are under no duty to retreat or run away.”

Sanders went on to praise the officers for their actions.

“They acted in self-defense and quite frankly acted heroically in the protection of one another and their own lives,” the prosecutor told WXIX. “Therefore, Officer Dooley and Officer Bolton have been cleared of any wrongdoing in this incident. As far as I’m concerned, this case is closed.”