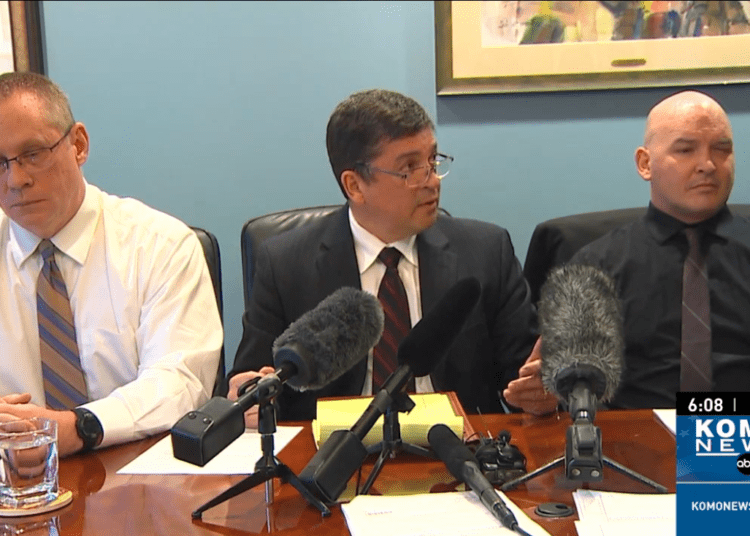 Two deputies of the Whatcom County Sheriff's Office were wounded in February. They are filing a lawsuit against the man accused of shooting them. (KOMO News)

MAPLE FALLS, Wash. – Two deputies of the Whatcom County Sheriff’s Office who were wounded by gunfire in February have filed a lawsuit against the man accused of shooting them, according to a report.

This comes as the suspect, Joel Young, 60, awaits a criminal trial for the same shooting after being charged with two counts of attempted first-degree murder, KOMO News reported.

Last month the judge set Young’s bail at $5 million based on the “seriousness of the alleged offense.”

On Feb. 10 deputies were dispatched at 4:15 p.m. to an area northwest of Bellingham and near Peaceful Valley and State Route 547 in Maple Falls, a spokeswoman for the sheriff’s office said last month.

People living next to each other were having an argument over burning wood in the backyard, according to court documents. The reporting party said Young was involved in the dispute and was shooting his shotgun in the air toward the neighbors’ home.

Upon arrival the deputies tried to diffuse the situation with the armed man. However, they were each shot in the head, according to a department press release following the shooting.

Young eventually surrendered and was arrested.

The wounded deputies spoke with members of the media during a news conference on Friday, recounting their experiences from that day, KOMO reported.

Deputy Jason Thompson and his close friend, Deputy Ryan Rathbun, arrived at the location of the dispute.

Thompson said: “[Young] said something to the effect of ‘do you guys want to shoot?’ To which I said, ‘no, we’re the sheriff’s office,’ maybe he didn’t know who we were, ‘would you like to come out and talk with us?’”

However, the gunman had no desire talk, according to Thompson.

“I think the last thing I said to him was, ‘sheriff’s office, drop the gun,’” Thompson said. “And then I was shot.”

After being shot, Thompson said his mind was running a mile a minute.

“I had a weird thought process of ‘am I dead? Is this what death is?’” He asked himself, after 13 shotgun pellets entered his head, KOMO reported.

The shotgun blast led to a broken nose and caused him to lose vision in his eye.

Rathbun was also shot. He suffered an eye injury and fractured his hand.

“It was very chaotic,” Rathbun recalled.

Fortunately, some neighbors came out to help the wounded deputies by returning fire at Young before he later surrendered as backup personnel and a SWAT team responded.

In a news story following the shooting, KOMO noted, “Young went outside, yelled at the deputies and shot at them, hitting the first in the head. The other deputy left his cover to return fire, but was then shot again. A bystander then began to shoot his handgun at Young while the Whatcom County deputies were pulled away from the line of fire.”

After being wounded, Thompson and Rathbun were rushed to the hospital for medical care. However, their fight isn’t over.

“They were met with shotgun blasts to the face,” said Daniel Horne, the attorney for both deputies.

According to Horne, the lawsuit against Young accuses him of reckless infliction of emotional distress as well as assault and battery.

Rathbun and Thompson said the lawsuit is about sending a message.

The local news outlet sought a statement from Young’s attorney, but did not immediately receive a reply.