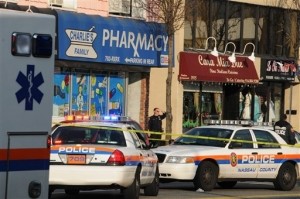 Investigators Piece Together Who Shot Who at Long Island Pharmacy

Investigators Piece Together Who Shot Who at Long Island Pharmacy

SEAFORD, N.Y. (AP) — A modest shrine of flowers and American flags were placed near the front door of a pharmacy on New York's Long Island on Monday, steps from where an off-duty federal agent who had served in Iraq and Afghanistan was mortally wounded while trying to intervene in a pharmacy holdup.

Detectives, meanwhile, were conducting ballistics tests, interviews and likely reviewing video surveillance from nearby stores to unravel the sequence of events that led to the New Year's Eve killing of veteran ATF Agent John Capano, as well as the gunman, a career criminal who had served time in prison for armed robberies.

Many questions remain about their deaths. Chiefly, who shot them? Though the robber, identified by police as 43-year-old James McGoey of Hampton Bays, was armed, police have not said whether he fired at Capano or whether Capano was armed. And two other men were present, one an off-duty NYPD officer and the other a retired Nassau County police lieutenant.

As they continue to try to determine what happened, police have given few details about the moments leading up to the shootings.

At about 2 p.m., McGoey went into Charlie's Family Pharmacy, a quiet family run store in Seaford and announced a holdup, police have said. Capano was in the store at the time. He is believed to have followed McGoey toward the door and confronted him.

At about the same time, someone ran into a deli several doors down owned by the retired Nassau County officer and told of the robbery in progress. The retired officer and the off-duty NYPD officer, who was a customer in the deli, went to the pharmacy. When they arrived, they saw Capano and McGoey in a skirmish outside the store. It is unclear who fired the next shots, but Capano and McGoey ended up dying of gunshot wounds.

If investigators determine Capano was killed by so-called friendly fire, it would mark the second such shooting in the suburban county in 2011. In March, a Nassau police officer in plainclothes was shot to death by a transit authority officer in Massapequa Park.

Nassau County Police Lt. Kevin Smith, a department spokesman, declined to comment on specific aspects of the investigation Monday. He would not elaborate on whether images of the shooting had been captured on camera but did say that it's become standard in investigations for the department to try to find surveillance video.

The shooting was the second deadly holdup in a pharmacy on Long Island in 2011; in June, a gunman opened fire in a drugstore about 30 miles east in Medford, killing two employees and two customers before fleeing with a backpack filled with painkillers.

McGoey had four robbery convictions on his record, three of which were pharmacy holdups, between 1990 and 2000, court records indicate. He was released from prison in August 2010.

Several physicians on Long Island have been arrested in an ongoing federal probe of prescription painkiller abuse.

The Seaford pharmacy was open Monday, but a clerk behind the counter said no one there wanted to talk about the shooting.

A funeral Mass for Capano, 51, was scheduled for Friday at St. William the Abbott Roman Catholic Church in Seaford.

"To come back and to be killed on New Year's Eve on the main street in his hometown community is just a horrible tragedy after everything he's gone through in his career," said U.S. Rep. Peter King, R-Seaford. King said his wife had taught Capano in fourth grade and the two families were close.

Capano, a 23-year veteran of the Bureau of Alcohol, Tobacco, Firearms and Explosives, taught U.S. military and local forces in Afghanistan and Iraq how to investigate blasts, said Rory O'Connor, assistant special agent in charge in the ATF's New York office. He lived in nearby Massapequa and was married with two children. He was at the pharmacy to pick up a prescription for his father, Jimmy, a retired New York City police officer. King said the elder Capano was known as the "unofficial mayor" of Merrick Road, the main thoroughfare in Seaford.