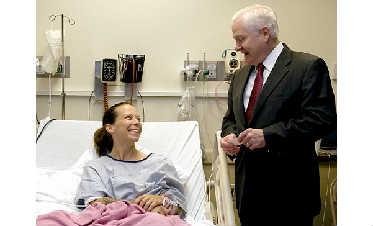 FORT WORTH, Texas – One of two civilian police officers who brought down the Army psychiatrist accused of going on a shooting rampage at Fort Hood said her wounds from the attack will cut short her career as street police officer.

Sgt. Kimberly Munley said doctors have told her she needs a total knee replacement, a surgery set for January, but that her new knee is likely to wear out sooner if she runs or carries the 15- to 25-pound gear pack required by her job.

"I do want to stay in law enforcement. I'm not going to be able to do what I did before, which is basically work the street," she told Wilmington, N.C., television station WECT on Wednesday. "It's going to give me another avenue to look in as far as possibly teaching and instructing."

Fort Hood officials said Thursday that Munley, 34, who was shot in the leg and hand, has not started the process to determine if she's physically able to do her former job.

Munley and Sgt. Mark Todd, another civilian officer in Fort Hood's police force, are credited with shooting Maj. Nidal Hasan to end the Nov. 5 shooting spree on the Texas Army post, about 150 miles southwest of Fort Worth. Todd, 42, was not injured and is already back at work.

Hasan remains hospitalized in a San Antonio military hospital but is paralyzed from his wounds, said his attorney John Galligan.

Hasan has been charged with 13 counts of premeditated murder and 32 counts of attempted premeditated murder. Army officials have not said if they will seek the death penalty, but they plan an evaluation in the next 45 days to determine his mental state that day and whether he is competent to stand trial.

In a posting on her blog, Munley said she was lucky that she did not lose her leg, where a bullet hit an artery. She said she now has to use a wheelchair and walker, but "cannot complain one bit" because she feels she was given a second chance at life.

"I have addressed more or less every thought and emotion about what's happened to everyone else _ the injured and the ones that did not make it and their families," Munley told the television station. "I can't tell you if I have any thoughts towards what he's done to me because I've been too overwhelmed with trying to come to terms with how everyone else has suffered through this."

Munley, who previously was in the Army, worked as a police officer in Wrightsville Beach, N.C., from 2000-02.

Law Officer is the only major law enforcement publication and website owned and operated by law enforcement. This unique facet makes Law Officer much more than just a publishing company but is a true advocate for the profession.
Tags: LeadershipManagement AdvancementNewsTacticalTraining