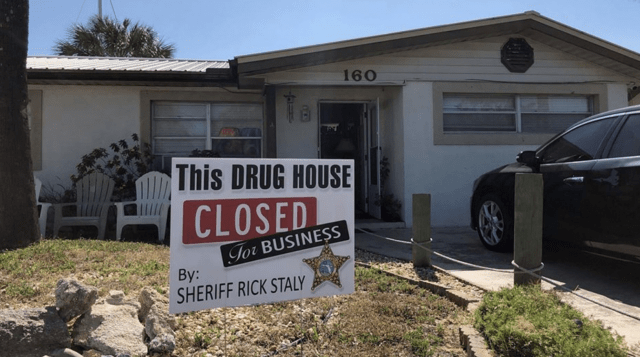 FLAGLER COUNTY, Fla. – A Florida sheriff is bringing unusual attention to the home of an alleged drug dealer. The department is letting would-be drug buyers know that one of the residences where narcotics are sold is “closed for business.”

The Flagler County Sheriff’s Office posted a large sign in the front lawn of a home that was reportedly the site of numerous illegal narcotics dealings by the owner, Jamie Bullock, reported Fox News.

“This drug house closed for business. By Sheriff Rick Staly,” the sign read.

According to the sheriff’s office, Bullock, 36, sold cocaine numerous times out of her home in Flagler Beach.

Last December, she was charged with several narcotics offenses including possession of cocaine with the intent to sell. After posting bond on those charges, she resumed selling narcotics from her home, authorities said.

A search warrant executed Friday at Bullock’s home found additional narcotics inside. As a result, she was charged – again – on multiple drug offenses.