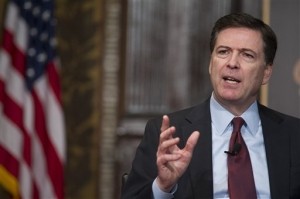 WASHINGTON (AP) — The United States is at a crossroads on matters of race relations and law enforcement, presenting "hard truths" that the public and police must confront, FBI Director James Comey said Thursday.

He stepped squarely into the national discussion about police conduct and officers' interactions with minority communities, explaining that he "felt like we haven't had a healthy dialogue, and I don't want to see these important issues drift away."

Answering questions after a speech at Georgetown University, he noted there was "a tendency to move onto other things as busy people. But these issues, especially about race and law enforcement, have always been with us, and we can't let it drift away and then talk about it another day."

The deaths of Michael Brown in Ferguson, Missouri, and Eric Garner in New York, at the hands of white police officers, as well as the more recent slayings of two New York police officers, have raised difficult issues on both sides of the debate, Comey said.

One is that police officers who work in neighborhoods where most street crime is committed by young black men may hold unconscious biases and be tempted to take what he called "lazy mental shortcuts" in dealing with suspicious situations.

That means officers may be influenced by feelings of "cynicism," relying on assumptions they should not make and complicating the "relationship between police and the communities they serve," he said.

"The two young black men on one side of the street look like so many others that officer has locked up," Comey said. "Two white men on the other side of the street — even in the same clothes — do not. The officer does not make the same association about the two white guys, whether that officer is white or black, and that drives different behavior."

But another truth, he said, is that minorities in poor neighborhoods too often inherit a "legacy of crime and prison," a cycle he said must be broken to improve race relations with police.

The speech was Comey's most expansive take by far on issues that came to the forefront last summer after Brown, an unarmed black 18-year-old, was fatally shot during a confrontation with a white police officer. In December, two New York officers, Rafael Ramos and Wenjian Liu, were shot dead in their patrol car in Brooklyn.

Attorney General Eric Holder has spoken frequently on the topic, though he has occasionally faced criticism for remarks that some have interpreted as insufficiently supportive of the police — complaints the Justice Department says are baseless. Last month, he urged better data on how often police use force and are themselves attacked.

Comey echoed those calls in his speech Thursday, saying there should be more reliable records on the circumstances of police shootings and the demographics of the individuals involved. The FBI tracks the number of "justifiable homicides" by police officers, but because departments report those figures voluntarily, the data is incomplete.

"The first step to understanding what is really going on in our communities and our country is to gather more and better data related to those we arrest, those we confront for breaking the law and jeopardizing public safety, and those who confront us," Comey said.