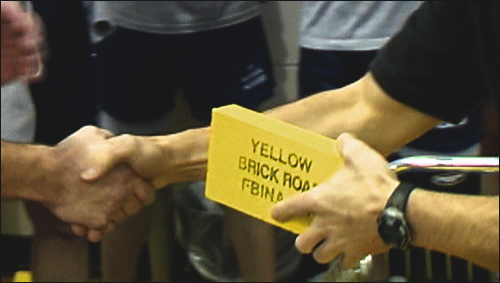 The FBI National Academy is a professional development course for U.S. and international law enforcement leaders. It serves to improve the administration of justice in police departments and agencies at home and abroad and to raise law enforcement standards, knowledge, and cooperation worldwide.

Its mission is “to support, promote, and enhance the personal and professional development of law enforcement leaders by preparing them for complex, dynamic, and contemporary challenges through innovative techniques, facilitating excellence in education and research, and forging partnerships throughout the world.”

Less than 1% of police officers in the United States attend the academy and one of the traditions is the infamous “Yellow Brick Road” run.

The final test of the fitness challenge, the Yellow Brick Road is a grueling 6.1-mile run through a hilly, wooded trail built by the Marines. Along the way, the participants must climb over walls, run through creeks, jump through simulated windows, scale rock faces with ropes, crawl under barbed wire in muddy water, maneuver across a cargo net, and more. When (and if) the students complete this difficult test, they receive an actual yellow brick to memorialize their achievement.

The course came to be known as the “Yellow Brick Road” years ago, after the Marines placed yellow bricks at various spots to show runners the way through the wooded trail. The overall fitness challenge began at the National Academy in 1981 and has evolved over the years; bricks were awarded starting in 1988.

Until now, very few could participate in the “Yellow Brick Road” run.  That was until Halley McGookin came up with the idea to do a “virtual” run in honor of this challenge and better yet, she’s doing it for charity.

The idea of the virtual run fundraiser based on the Yellow Brick Road came from her father, an FBI instructor at the National Academy and he has run the course many times.

“I said that I would do it and he thought it would be great for me to learn from the experience while doing something good,” Halley told Law Officer.

A soon to be Junior in High School and the Student Government President in Stafford, Virginia, Halley is right next to the home of the FBI Academy, Quantico.

“I’m excited about this fundraiser.  My hope is to show positive things about police because there has been a lot of negative things lately.  My Dad (FBI agent} and his friends, who are cops, are great people and don’t deserve the disrespect that is happening.  I can’t change all that but I can do my small part.”

Halley and her dad are doing all of the work and they want it to turn into a yearly fundraiser.  This year, half the money goes to the FBINAA Charitable Foundation and the other half goes to the winning National Academy Session’s choice law enforcement charity.

As a bonus, Yellow Brick Run medals and bibs will be sent out to each race finisher.

Participants can sign up at www.yellowbrickrun.org and run the 6.1 mile race at their location between June 20th and July 20th.  You can also register for a 1 mile, 5K and half marathon.

We congratulate Halley and her father for this great concept which gives every police officer in America the chance to experience a small part of the “Yellow Brick Road” Run.

Travis Yates is a writer and editor at Law Officer. An ILEETA Trainer of the Year, his Seminars in Risk Management, Leadership & Officer Safety have been taught across the world and are highly sought after. Travis is the author of "The Courageous Police Leader: A Survival Guide for Combating Cowards, Chaos & Lies (www.stopcowards.com). He is a current Doctoral Student in Strategic Leadership, a graduate of the FBI National Academy and current police commander.
Tags: exclusive