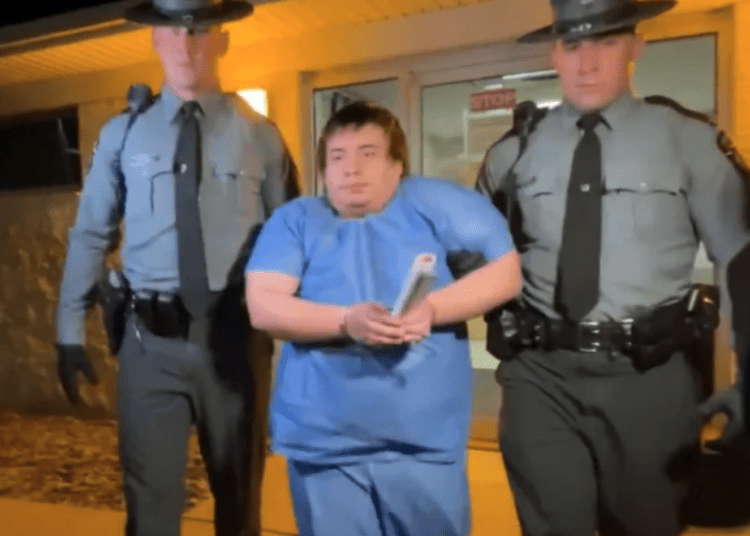 BERWICK, Pa. – A demented man in Pennsylvania has confessed to plowing his car into a crowd of people, killing one and wounding 17 others, before he drove home and murdered his mother with a hammer.

Adrian Oswaldo Sura Reyes, a 24-year-old from Nescopeck, reportedly got into an argument with his mother before hopping into a car and driving to neighboring Berwick, where the mass casualty crash occurred, according to a criminal complaint obtained by WYOU.

Police said he drove by the Intoxicology Department bar where a crowd had gathered for a fundraiser for the families of 10 people who were tragically killed in a fire earlier this month. He turned around after he decided to drive into the crowd.

Reyes told police he was just tired of fighting with his mother.

He barreled into the crowd around 6:15 p.m., killing 50-year-old Rebecca L. Reese and sending 17 others to the hospital.

“I didn’t ram ’em, I just ran them over,” Reyes told investigators, according to the affidavit, the New York Post reported.

After mowing down the crowd, Reyes returned home. Upon arrival, he saw his mother standing outside in the street. Police said he floored the gas and smashed into her with the front of his automobile.

According to police, he admitted getting the hammer from his car and bashing his mother in the head four or five times with it.

Officers found the woman dead upon arrival and arrested Reyes.

BERWICK, Pa. – A man accused of mowing over people with a car as they attended a fundraising event, killing one and injuring 17, is also accused of beating a woman to death following a second crash in Pennsylvania, according to reports.

The sequence of tragedies occurred when one person was killed and another 17 people injured as a vehicle plowed into a crowd gathered at Intoxicology Department along West 2nd Street in the borough. People were attending a fundraiser for victims of a residential fire that killed 10 family members earlier this month, authorities said.

Following the horrific vehicular homicide with additional mass injuries, the suspect then killed a woman in a separate incident, according to law enforcement officials, Fox News Digital reported.

“On Saturday, August 13, 2022, at approximately 6:15 p.m. Pennsylvania State Police Bloomsburg received a call to assist Berwick Police Department with a vehicle that drove through a crowd at a community event on West 2nd Street, Berwick Borough, Columbia County,” a statement said.

After the suspect drove his car into the crowd of the benefit for fire victims, he drove to Nescopeck. Police found a woman dead there. The suspect was taken into custody. https://t.co/xmU9xut1qB

Troop N grieves with the Family members of all the Victims along with the entire Community during this difficult time. We will do a thorough Investigation and bring Justice to all involved!

The suspect fled the chaotic scene but was reportedly involved in another crash along Ridgewood Avenue in Nescopeck, WNEP-TV reported.

As police arrived at the second crash, they found a woman dead and a man, later identified as Sura Reyes, who was then taken into custody.

The Luzerne County Coroner’s Office identified that woman as Rosa D. Reyes, 56. According to the coroner’s press statement, she was struck by a motor vehicle and assaulted with a hammer.

Sura Reyes was booked at the Columbia County Correctional Facility. He is being held without bail. His preliminary hearing is set for Aug. 29.