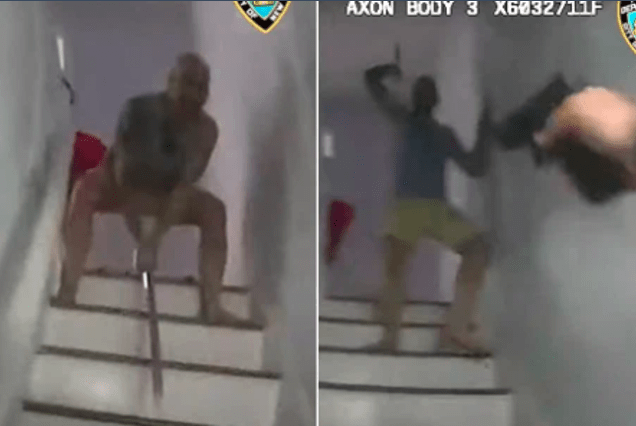 Body-worn camera captures the moment shots were fired on July 23 after police were called to a residence regarding a disturbance just after 10:30 p.m.

Officers Thomas Leonardo and Robert Ruhl were identified as the police personnel who responded to the call when they met Roberto Ramos, 45, who was crying on the second floor, New York Post reported.

Initially, officers convinced the man to get into an ambulance to seek treatment. Yet after a few brief minutes, Ramos jumped out took off back into the residence.

Leonardo chased Ramos up to the second floor, where he was met by the unhinged man swinging a 39-inch pipe at the top of the stairwell, according to NYPD.

Leonardo’s body camera footage, which does not have audio, shows the officer pulling his firearm discharging five rounds at Ramos, striking the man in the abdomen, back and arm, according to the department.

As a result, Ramos was taken to Staten Island University Hospital, where he was treated for unspecified injuries and later released, the Post reported.