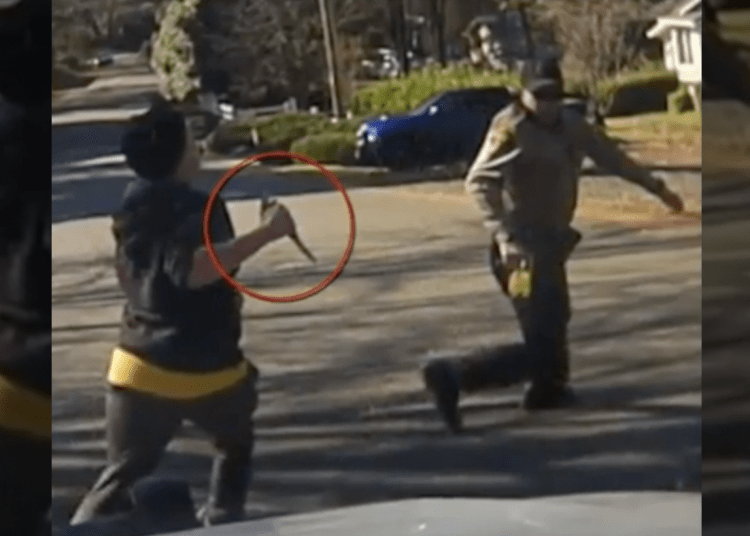 NEVADA COUNTY, Calif. — The Nevada County Sheriff’s Office released video that shows the moments leading up to a fatal deputy-involved shooting of a woman who attacked them with a knife earlier this month.

The video, published on the sheriff’s office’s YouTube page, comprises 911 calls, radio between dispatchers and deputies and footage from in-car dashboard cameras. The sheriff’s office does not have body cameras for its deputies.

The Feb. 4 shooting resulted in the death of Ariella “Sage” Crawford, 33, who was with her two young children when she was shot while wielding a knife. Authorities said Crawford’s birth name was Deidre Eloise Hawkins.

The first caller told a dispatcher that she had been driving in the area of Alta Sierra Drive and Gibboney Lane and had slowed down to avoid hitting a loose dog. As she slowed down, she told the dispatcher she also noticed a woman with children. The caller said she asked the woman if that was her dog and that the woman “was really weird about it,” KCRA reported.

The caller said she saw the woman again, walking in the middle of a road with the children before going to a nearby house. The woman then reportedly leaves the house and is seen walking up Alta Sierra Drive. One of the kids is on her shoulders and the other is holding her hand, the caller tells the dispatcher.

“It’s just, she’s not well,” the caller tells the dispatcher.

A second caller told a dispatcher that the woman had come up to her door.

“Somebody was following her, and she told me not to call the cops,” the second caller says. “And she wanted me to take her somewhere safe. She said, ‘they’re hurting my kids.’ And she was really scared and didn’t want … she asked me to take her to Nevada. I go, ‘Nevada City?’ She said, ‘No, the state line.'”

“She had seen them walking for quite a while and was concerned for the children’s wellbeing,” the dispatcher says. 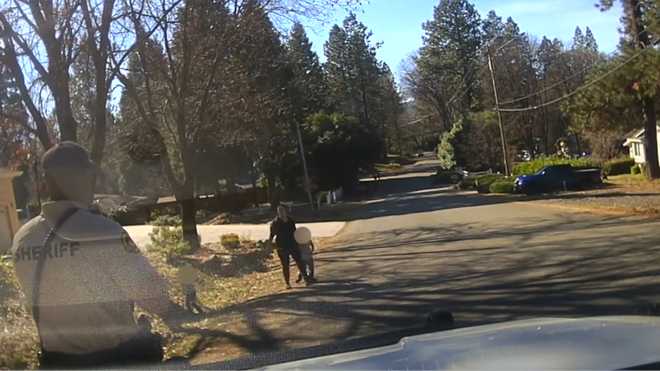 A still from the dashcam video. (Nevada County Sheriff’s Office)

When the dispatcher relayed information to responding deputies, the sheriff’s office is told that the woman was trying to get to Nevada and that the woman believed she and her children were in danger, KCRA reported.

The video then shows dashcam footage of what transpired.

“You’re not in trouble or anything like that,” a deputy is heard saying to Crawford.

“I know what you did to my babies,” she says in response.

A deputy asks her to put her knife away and says he is not going to harm her children.

Crawford shouts at the deputies before one of them approaches her from behind and deploys a Taser but it does not have the desired effect. She turns around and, knife in hand, charges at the deputy with the Taser. A second deputy shoots at Crawford several times, striking her.

“I tased. It was ineffective, she charged me,” the deputy with the Taser is heard saying after the shooting.

Crawford’s children begin to cry and try to run to their mother before being whisked away by an adult.

Crawford fell to the ground clinging to the knife. She was pronounced dead at an area hospital.