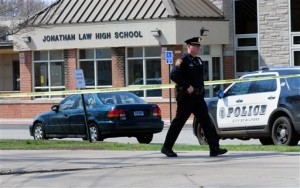 About 1% of students surveyed reported experiencing a violent victimization.

One indicator has been increasing: multiple-victim associated deaths at schools.

Decreases in school crime are concurrent with increases in police school resource officers.

The findings from the most recent overview of school crime are consistent with previous reports.

“What Do the Data Reveal About Violence in Schools?” is a product of the National Institute of Justice of the US Department of Justice. It can be found at School Violence.

Data on crime in schools comes from multiple sources, not unlike general crime statistics that comes from two sources within the US Department of Justice and private organizations like Gallup and academic studies, Crime in The US.

A review of the most widely used and well-known data sources reveals that incidents of multiple-victim youth homicides in schools started declining in 1994 but have been increasing since 2009.

Thus, the public’s perception that there is an increased likelihood of a school shooting is grounded in an increase in multiple-victim, school-associated deaths.

The following comes from my observations and not from the federal report.

In the late 1990s, SRO presence on campuses increased after the Department of Justice created a $750 million grant program, Cops in School to hire over 6,500 SROs, Wikipedia.

It’s interesting that the widespread increase of police officers in schools coincided with “Between 2001 and 2017, the percentage of students who reported being victimized at school during the six months prior to survey completion decreased for both violent victimizations (from 2% to 1%) and serious violent victimizations (from 1% to less than 0.5%).” There is less crime in schools, fewer serious crimes, and a decrease in student fear of being harmed.

Correlation does not equal causation and there is intense criticism of cops in schools from some quarters. Regardless, there is research indicating that police presence and tactics can lower crime and fear, Police Strategies.

Concurrently, crime decreased throughout the country during the measurement period except for 2015-forward. Violent crimes started increasing in 2015, Crime in the US.

Bullying is also a serious concern in schools. Bullying can be verbal (being threatened, called names, or insulted) and physical (being pushed, shoved, tripped, or spit on). Bullying may occur in various ways, including in person and virtually through social media.

We know that some school shooters felt bullied, victimized, persecuted, or injured by others prior to their attacks.

In some instances, the attacker experienced bullying that was long-standing and severe. According to the SCS, about 5% of students surveyed in 2017 reported being subject to this physical bullying behavior.

Students’ fear of being harmed has also decreased in the past few decades. The SCS asks students about their perceptions of safety and fear of attack at school during the school year. Between 2001 and 2017, the percentage of students who reported being afraid of attack or harm at school decreased overall (from 6% to 4%).

The School Survey on Crime and Safety (SSOCS)

According to the latest available SSOCS data, 71% of schools reported at least one incident of a violent crime during the 2017-2018 school year.

The SSOCS also asks principals about bullying. In 2009-2010, approximately 30% of schools reported incidents of bullying in the past week.

However, in the 2017-2018 survey, only about 14% of schools reported incidents of bullying in the past week.

The trends from July 1994 through June 2016 indicate that on average, school-associated violent deaths accounted for less than 3% of all youth homicides in the United States consistently throughout this time frame.

The most recent SAVD-SS data cover the period from July 1, 2015, through June 30, 2016. During this period, there were 38 student, staff, and nonstudent school-associated violent deaths in the United States; 30 of these were homicides, seven were suicides, and one death resulted from legal intervention.

During this same period, there were 1,478 youth homicides and 1,941 youth suicides in the United States.

Among homicides with known motives, gang-related activity (58.2%) and interpersonal disputes (44%) were the most common motives for single-victim, school-related homicides, suggesting that these homicides may reflect broader communitywide causes of violence.

The proportion of single-victim, school-related homicides hovers around or below 2% of all youth homicides occurring from 1994 to 2016.

The SAVD-SS provides evidence of an increase in the number of multiple-victim homicides in recent years.

The homicides associated with multiple-victim incidents increased from June 2009 through the 2017-2018 school year.

Although likely related to only eight specific incidents occurring on or after July 2016, this increase has no clear explanations.

In the midst of these trends pointing to decreases in violent crime, serious violent crime, and bullying in schools, one indicator has been increasing: multiple-victim associated deaths at schools.

However, multiple-victim homicide incidents are increasing, and we do not know why.