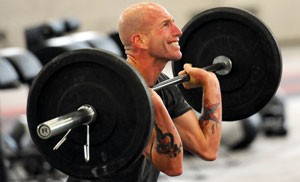 CrossFit and Below 100: An Unexpected Match

No Result
View All Result
Home Special Topics Below 100

CrossFit and Below 100: An Unexpected Match

By now, most readers probably have a basic knowledge of the fitness program CrossFit: It’s a strength and conditioning program that touts functional movements designed to enhance the fitness of everyone from Special Forces teams to the average active adult. CrossFit caters to first responders, so I thought I knew what it was about and why others were so passionate about it. That was until a few months ago, when a friend took me through a CrossFit baseline workout.

Ten minutes later, I was in a fetal position in the corner of the gym, feeling pain I had never felt before. I was hooked.

I have since launched into a journey of sorts, studying the history of CrossFit and its growth. What I found—surprisingly—is a model of success that almost mirrors Below 100.

In 2000, a fitness trainer by the name of Greg Glassman developed a new method of training. Instead of using gym equipment that only developed isolated portions of the muscle, he combined several different movements and used various Olympic lifts to build strength and endurance with a focus on a full range of motion. Many of the workouts took as little as five minutes. In short order, Glassman’s newfound methods started to spread.

Similarly, Below 100 is very much a new way of looking at officer safety. Dale Stockton, editor-in-chief of Law Officer, often says that when he heard of the concept (focus on risk areas under an officer’s control) he assumed there was already something being done. When he found nothing, the campaign began. Although officer safety programs have traditionally looked at how to prevent attacks by bad guys, they were woefully inadequate at examining issues that are within our power to change. In Below 100 classes, we often talk about the “low-hanging fruit”—things that LEOs can control, such as wearing our seatbelts and wearing our vests. By focusing on these things, we can reduce line-of-duty deaths (LODDs).

Glassman had too many naysayers to mention here. Most were gym owners who ceremoniously removed him from their gyms when he brought clients in to do CrossFit workouts, whether because of the clients’ screams of pain or the fact that the owners didn’t like to see their equipment made obsolete. Glassman persevered against these detractors and eventually opened up the first CrossFit Gym in Santa Cruz, Calif. Today, there are still gym owners and others who reject the CrossFit approach, but there are countless more testimonials from individuals whose lives have been changed—and there are CrossFit gyms across the country.

As rewarding it is to be a part of Below 100, one of the more challenging aspects is overcoming the negative energy of those who do not support our efforts. Like those who spoke against Glassman, these detractors lack knowledge of Below 100 and haven’t even been through a class. Like those gym owners, I fear that the almighty dollar or outright ignorance have gotten in the way of sound judgment. Simply put, if it won’t help them, they don’t care.

I like what Glassman did and I’m proud to say that Below 100 has done the same: Ignore the naysayers and change the culture anyway. Glassman didn’t need the traditional gyms and Below 100 doesn’t need the approval of the traditional law enforcement ambassadors. We are proud to have the support of Concerns of Police Survivors (COPS), the Officer Down Memorial Page, the National Tactical Officers Association and a host of others.

The beauty of CrossFit is the simplicity of the program. One online search will show you various workouts that require no equipment and very little time. Can pushups, sit-ups, squats and sprints really give you a high-quality workout? If they are conducted in the right form, the answer is a resounding yes.

I have heard no less than a dozen times from attendees how simple Below 100 is. “I can’t believe I’ve never thought about this” was one statement I recently heard. Could telling officers to slow down, wear their seatbelt, wear their vest, avoid complacency and focus on “What’s important now” really make a difference? Like CrossFit, if presented in a certain way, the answer is, absolutely.

So how did CrossFit move from being an idea in one guy’s head to being the official program of more than 7,000 CrossFit-affiliated gyms, having an unofficial presence in thousands of others, being a part of live broadcasts of the games on ESPN and developing a core following of millions of individuals?

It comes down to how the program makes disciples. Someone finds out about CrossFit from a friend or a co-worker, they go to the website, and if it strikes a chord with them, they pursue CrossFit certification. This is a two-day course given in multiple locations every weekend that trains others in the philosophy of CrossFit and how to teach others.

In the Below 100 world, we call this “train the trainer”—but it’s how that training is designed that has grown CrossFit and Below 100 so rapidly. There is no bureaucracy or heavy hand. In fact until recently there was not a charge to become a CrossFit affiliate. It’s as simple as take the train the trainer, then go back to your community and change everything.

In virtually every course, Below 100 is presented for free. All materials are given freely and support is continued via Web and email. How does a training program with very little funding, no grant support and with no admission fee certify thousands of trainers in 24 months? It’s the open-source philosophy that has propelled that momentum.

Here’s just one great Below 100 example: Tommy Loftis, a law enforcement coordinator for a U.S. Attorney, has conducted more than 70 Below 100 programs, most in his home state of Alabama. He was a believer after seeing the website and was so convinced he traveled to Post Falls, Idaho, to attend a trainer: “I was amazed at what I experienced in Idaho. Here was Dale Stockton and Travis Yates delivering a message that you couldn’t turn away from. I knew that day that I, and Alabama law enforcement, would never be the same.”

Another bonus Loftis notes: how the trainer program is implemented. Just like CrossFit, Below 100 training sessions assume that attendees are passionate about the program and will continue it back home. The material is given and there is little oversight to what comes next. Loftis went back to Alabama as a certified trainer and got to work. “I certainly had a few questions when I started and those questions were answered, but I never felt like I was prohibited or limited, from doing what I wanted in the classes. I was even told to modify as I see fit, with one caveat: Change Alabama!”

Now, back to that baseline workout a few months ago that left me on the ground. I went back to it a month later and while I still ended up on the ground when I was done, it took almost four minutes less time to complete. The hard work and focus over the last month had seemingly paid off.

It works the same for Below 100. If we work hard at addressing what we can control and maintain our focus, we will see success in fewer LODDs. We have seen it the last two years and we will continue to see it into the future. Just like CrossFit or any fitness program, it won’t happen overnight, but rather in increments—through hard work and passion.

Are you ready to put in the work? Check out www.Below100.com and attend a free class near you and then—just like Glassman told others years ago—”Go change the world.”