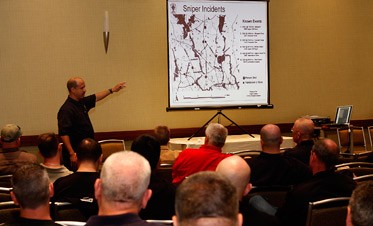 The title, and the core information in this article, are excerpts taken from the presentation I’ll be making at the 2010 International Association of Law Enforcement Educator and Trainers Association’s Conference. Better known as ILEETA, the conference will be held April 19-24, just outside of Chicago. If you’re a law enforcement instructor — college, departmental or independent — and don’t attend ILEETA, you are making, as Arnold would say, a “BIG MISTAKE.” The ILEETA conference is the ultimate learning and networking experience available to law enforcement trainers. Last year’s conference was attended by roughly 800 trainers (from all 50 states and seven countries). This is your chance to train with the best law enforcement instructors in the world, instructors such as Jeff Chudwin, Dave Spaulding, Alexis Artwohl and too many others to list.

I know. Many departments don’t consider training the top priority it should be and won’t pay for you to go. Don’t let that stop you. As an independent trainer, I’m attending ILEETA using a week’s vacation time and paying my own way. So yes, without any hesitation, I’m here to tell you that ILEETA is a great investment of time and money. For more information, visit www.ileeta.org.

Techniques vs. Concepts in Use-of-Force Training

According to Mr. Webster’s dictionary, a technique is the procedure, skill or art used in a specific or particular task. In many traditional martial arts, there’s a different, specific technique to respond to every possible attack. So if someone grabs your hair, you do technique A. Technique B must be learned to respond to a lapel grab, C counters a wrist grab, and it goes on ad nauseam. Now don’t get me wrong, for true martial artists who have and wish to devote the time necessary to train like this (which included me in my younger years), it’s great. But technique-based training, IMHO, is the crux of the failure of much of the traditional, martial arts based, police use-of-force training. We don’t have sufficient training time to take officers who aren’t already proficient in the martial arts and train them to functional levels of proficiency those techniques. The bottom line comes straight from my presentation slide: If your students can’t become reasonably proficient and retain the tactics you’re teaching in your allotted training time, the time you’re spending is wasted.

Webster defines a concept as a broad abstract idea or guiding general principle. IMHO, the mantra in training should now be concepts instead oftechniques. If a technique can’t be used as a concept, as in multiple situations and in varied environments, it’s probably too detailed and “martial artsy” for the masses, and likely a waste of time to attempt teaching to most officers.

The foundation of conceptual self-defense training should be gross motor skill concepts, such as knee and elbow strikes. These can be used when fighting while standing, kneeling, prone or even supine. By building your system on this foundation, the non-martial-artist line officers will still have some solid use-of-force options after the martial-arts-based techniques fade from their memories.

Liability and The Reality of Force

For too long, we have stood back and allowed society, politicians and some police administrators to expect use-of-force situations to be antiseptic, injury-free events. Perhaps one of the greatest lessons we can learn and teach to stop the insanity of this ludicrous expectation came from John Giduck, author of The Terror at Beslan. In an article he wrote for SWAT Magazine, “The Reality of Hand-to-Hand Combat, part 1,” he eloquently and truthfully stated, “Few seem to recognize that, by definition, if a hand-to-hand combat system will not get you sued, it’s only because it wouldn’t work in the first place.” Reality check, folks. Fighting with the police is a dangerous contact sport. Why is it “just part of the game” when a football or rugby player is injured, crippled or killed on the field, but if a violent criminal gets a black eye from an officer, the officer must have done something wrong?

The over-concern regarding liability can actually lead to unnecessary injuries and increased liability in many altercations. When officers are taught watered-down techniques that they can’t possibly perform (aka ninja-cop-fu) and then get into a real altercation, the ninja-cop-fu invariably fails to control the assailant. The fight continues and turns into an unnecessarily long, drawn-out brawl. The levels of force used continue to escalate, and usually both of the participants end up suffering more serious injuries than what should have been necessary. Had the officer been trained in concepts, following the doctrine of reasonable force, and established control with a proper level of force immediately, instead of attempting unreasonably low level ninja-cop-fu techniques under the politically correct doctrine of minimal force, he or she would have been better prepared to stop the subject’s assault and resistance promptly, thus minimizing the damage to both participants.

The Test of Time

There are numerous ways to test police equipment, tactics and training. There’s Dave Spaulding’s 3S Test. There’s the trial by fire, where we learn by experience but have to survive the lesson for it to be a positive testing experience. But in most cases, regardless of what you’re looking for, nothing is as effective as the test of time.

Think about this for a minute. The new Chevy ZR-1 Corvette is America’s super car. Roughly 2900 lbs., more than 630 HP, and capable of speeds in excess of 200 mph. Some would argue this vehicle is nothing but the very best in advanced technology. Yet its incredible performance depends on a concept that is over 6,000 years old. (Hold that thought a second; we’ll come back to it.)

Let’s talk about police equipment. What conceptual design did the prehistoric warrior use for the earliest impact weapon? It was a (somewhat) straight stick that he picked up at one end, and he used it as a club. This straight-stick concept proved itself effective for thousands of years. Beginning somewhere around 1980, suddenly this concept became “invalid.” Equipment manufacturers began making all sorts of devices to replace the impact weapon. There were hook-shape control tools and batons with exotic configurations that would ninja-cop-fu the bad guy and not even leave a scratch.

So today, only 30 years later, what’s the prevailing concept for impact weapons? Although the materials from which it’s constructed have changed, the straight stick is back. Hasn’t it been proved effective for thousands of years? The other, overly complicated weapons failed the test of time. The test of time ruthlessly crushes the ineffective and mediocre, and spotlights the truly significant. If a concept, tool or technique survives for centuries, it’s because it works and works well; it’s also likely to be a concept that cannot be improved upon.

Go back to that new Corvette and the 6,000-year-old wheels that it uses. Although the materials are different, the round wheel with a center axle is exactly the same concept as it was when it was first invented (approximately 4,000 B.C.) Knee and elbow strikes can be traced back to at least 1238 A.D., with the beginning of Muay Thai. The bottom line: Like the wheel, some concepts will never be improved. Personally, I’ll depend on a centuries old, time-tested concept over an unproven tactic any day. Yes, we should still constantly strive to improve our tools and tactics. However, we must simultaneously be cautious and absolutely prove that a tool or technique with which we’re replacing a time-tested one is truly superior before implementation.