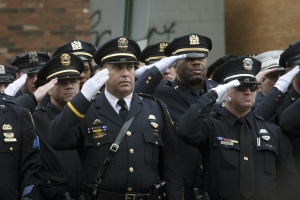 NYPD Cops are being told to  “take a deep breath’’ — and close their eyes — when dealing with angry people, according to a recent report from the New York Post.

The advice is one part of a $35 million “smart policing’’ training program introduced by Mayor Bill de Blasio and Police Commissioner Bill Bratton.

There are wide reports that the mandatory training is seen as “useless….not realistic….and pretty silly.”

One officer reported that in the training “they said if you find yourself in a situation that’s getting heated, take a step back, close your eyes and take a deep breath.”

The Post reported last week that many cops have been falling asleep in their seats as they listen to the lectures at the brand-new, $750 million Police Academy in Queens, and that about 80 percent gave the program negative reviews afterward.

One high-ranking NYPD source said the lectures were “boring” and a “big disappointment.”