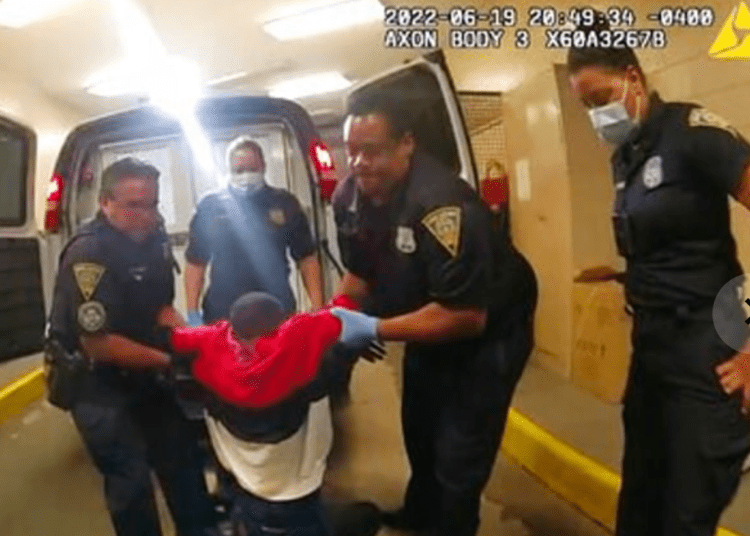 NEW HAVEN, Conn. — In a case that has similarities to the Freddie Gray incident in Baltimore several years ago, five Connecticut police officers were charged with misdemeanors Monday over their treatment of a suspect who was paralyzed from the chest down due to a neck injury sustained as he was being transported in the back of a police van.

Randy Cox, 36, was arrested June 19 after New Haven police said they found him in possession of a handgun at a block party. While being transported to the station for processing on the weapons charge, the driver of the van braked hard, apparently to avoid a collision, causing Cox to fly headfirst into the wall of the vehicle, according to law enforcement authorities, WFMJ reported.

The officers are accused of mocking Cox, saying he was drunk, as he pleaded for help. They allegedly removed him from the van with his feet dragging on the ground before placing him in a holding cell and eventually transferring him to the hospital.

All five New Haven police officers were charged with second-degree reckless endangerment and cruelty to persons. Each one has been on administrative leave since the incident occurred.

RELATED: ‘I’d rather be judged by 12 than carried by 6,’ but going to prison sucks

“You can make mistakes, but you can’t treat people poorly, period. You cannot treat people the way Mr. Cox was treated,” he said.

The officers surrendered at a state police barracks Monday. Each was processed, posted a $25,000 bond and released. They are scheduled to make a court appearance Dec. 8, according to a news release from state police.

Cox is black. We only mention that fact since the case has drawn outrage from civil rights advocates like the NAACP.

Moreover, Cox and his family are represented by Ben Crump in a $100 million federal lawsuit against the city of New Haven and the five officers. The civil action was filed in September. The lawsuit alleges negligence, exceeding the speed limit and failure to have proper restraints in the police van, AP News reported.

The criminal charges alleging a weapons violation against Cox were dropped over the summer, according to WFMJ.

Gray, who was also black, died in 2015 after he suffered a spinal injury while handcuffed in a city police van in Baltimore following his arrest for illegal possession of a knife. Six officers were criminally charged in the case, but no one was convicted as the court cases were bifurcated. The first case ended in a mistrial, while the next two officers were acquitted. Finally, charges were dismissed against the final three officers in 2016 and the U.S. Department of Justice announced in 2017 that it would not pursue the matter further.

Nevertheless, the city previously doled out $6.4 million to settle a lawsuit with Gray’s family.

Four of the New Haven officers filed motions last week claiming qualified immunity from the lawsuit. Their attorneys argued that the officers actions in the case did not violate any “clearly established” legal standard.

The New Haven Police Department announced a series of policy changes over the summer as a result of the case. They’ve eliminated the use of police vans for most prisoner transports, instead relying on marked patrol units. They also require officers to immediately call for an ambulance to respond to their location if the arrestee requests or appears to need medical aid.