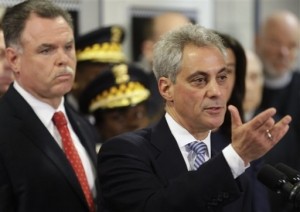 In an unprecedented move, city attorneys on Friday offered to admit to a federal jury that a code of silence exists in the Chicago Police Department if it meant Mayor Rahm Emanuel would not have to testify about it at the upcoming trial involving two whistleblower cops.

But U.S. District Judge Gary Feinerman rebuffed the idea, saying he was standing by his ruling earlier this week that Emanuel must take the witness stand to answer questions about the code of silence.

The Chicago Tribune reports that the ruling was a blow to the city, which has fought tooth-and-nail to keep Emanuel from having to take the witness stand. In a speech to the City Council, the mayor acknowledged the police code of silence amid the deepening scandal over the fatal shooting of black teenager Laquan McDonald by a Chicago police officer.

A spokesman for the city’s Law Department had no immediate comment Friday.