Sgt. Humes is a  32-year retired veteran of the Toledo, Ohio PD. Independent of his department, he achieved international recognition as one of the pioneers of modern, realistic police defensive tactics training and as a tactical author, whose training articles commenced in 1983 with Police Product News. In all, and now half-way into his fourth decade of training, his columns and articles have been published in six additional US published law enforcement magazines, one French LE magazine, and numerous other websites. In addition to producing the globally utilized training video Dynamic Striking Techniques, he has taught seminars and instructor certification schools as far West as Alaska, and as far East as North Carolina and trained instructors from across the globe at the International Training Conferences of the International Law Enforcement Educators and Trainers Association (ILEETA). 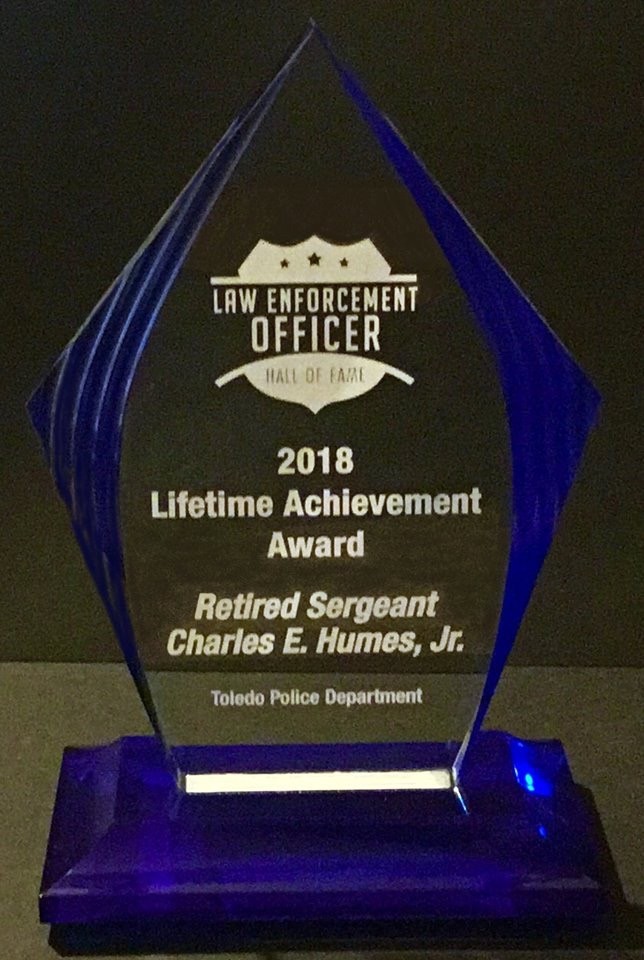 The legendary Chuck Remsberg (photo-left) made the presentation of Humes’ award. Mr. Remsberg is the author of the STREET SURVIVAL series of books, co-founder of the original STREET SURVIVAL Seminar, and the Editor-in-Chief of Force Science News.  The induction ceremony took place in the Toledo suburb of Maumee, Ohio.

Humes has been a tireless advocate for law enforcement training and leadership throughout his career and into retirement.  I cannot name anyone else that has brought the passion, integrity and humbleness to this fine profession more than my friend Chuck Humes.  It is certainly refreshing to see “one of the good guys” receive this incredible honor and prestigious award.

Six other Law Enforcement Officers who have excelled above and beyond in the line of duty were also inducted at the event. They include:

School Resource Officer Of The Year

For more information, contact Megan Stockburger, co-chair of the event, at: [email protected] or visit the LEO Hall of Fame’s website at: https://LEOHOF.COM

What Are Your Thoughts?
Tags: hall of famehumestacticsTraining