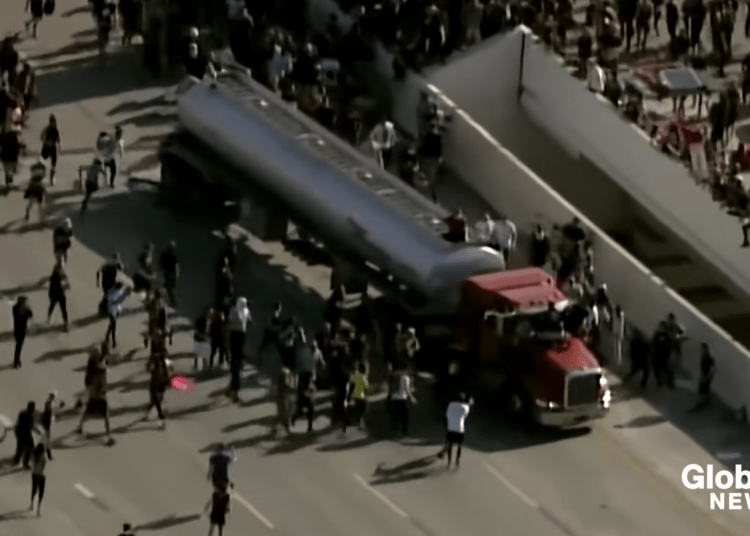 MINNEAPOLIS — A truck driver who drove through a large crowd of protesters that were congregated on a Minneapolis highway last year during demonstrations following George Floyd’s death will have criminal charges dismissed if he remains trouble-free over the next year, in what is called a continuance without prosecution agreement.

Bogdan Vechirko, 35, was facing two criminal charges, according to KTTC. Prosecutors filed a felony count of making threats of violence and the misdemeanor charge of criminal vehicular operation for the May 31, 2020 incident. The charges will be dropped as long as he stays out of legal trouble for the next year.

The truck driver told investigators he didn’t mean to drive into the protest or cause harm to anyone. He was “kind of in a hurry” returning from a fuel delivery in Minneapolis.

Video of the incident went viral last year. Footage from a nearby traffic camera showed a gathering of several hundred protesters on the Interstate 35W bridge suddenly split apart as Vechirko’s oil rig came rolling into the area, Law&Crime reported.

Vechirko slowed to a stop among the protesters, many of whom then turned their anger on him and his vehicle, hitting the truck with solid objects, scaling the large rig, and hitting the truck driver multiple times.

No protesters were harmed during the incident, but Verchirko sustained cuts to his face and neck.

Vechirko’s attorney Mark Solheim said at the time that his client “relied on his professional instinct and training to avoid a hard brake that could have jackknifed the truck and could have seriously injured or killed thousands of people, and instead slowed his vehicle while maneuvering through the parted crowd.”