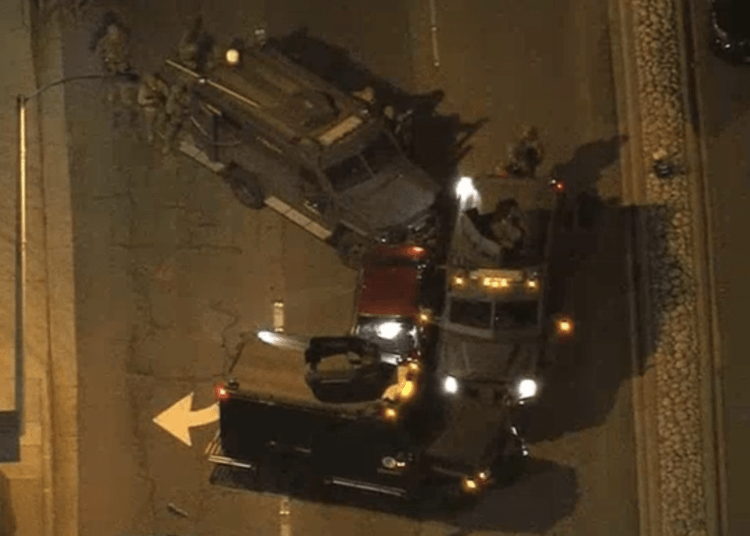 DIAMOND BAR, Calif. — A Pomona woman was arrested after an hourslong standoff with Los Angeles County Sheriff’s Department deputies Tuesday that ended after tear gas was deployed into the vehicle just moments before a 9-year-old girl walked out and into the arms of a SWAT officer.

Authorities say the incident started around 3 p.m. when the suspect rammed into a bystander several times. The victim of that collision then drove to the Walnut sheriff’s station for help, KTLA reported.

A chase eventually ensued with the suspect and law enforcement authorities on surface streets, where the driver of the red sedan veered into multiple automobiles, before coming to rest on Diamond Bar Boulevard near Palomino Drive.

LASD says they were not aware a child was in the car.

Deputies attempted two PIT maneuvers to stop the driver. However, it wasn’t until she rear-ended another vehicle that the pursuit came to a conclusion.

Sky5—news helicopter—was above the chase as the red sedan made its way from Chino to Diamond Bar around 3:55 p.m. as several Sheriff’s Department vehicles followed close behind.

The red vehicle made contact with a number of cars as it tried to get away from deputies.

After racing past an intersection, the suspect-driver hit additional vehicles that were stopped at a light, eventually halting after crashing into a silver vehicle.

The silver vehicle first stopped, then drove out of the immediate area.

The front of the red car appeared to have sustained damage. At least eight deputy vehicles pulled up behind the red car with weapons drawn, while the driver remained inside, KTLA reported.

A standoff continued for hours. The driver and deputies were still in a standoff when Sky5 left the scene at 5:35 p.m. When Sky5 arrived back above the scene just after 6 p.m., the car was surrounded by three large sheriff’s armored vehicles and holes could be seen in the rear window of the red vehicle.

Update: #LASD SEB SWAT operation for an assault with a deadly weapon suspect barricaded in a vehicle in the city of Diamond Bar has concluded after the deployment of an LASD unmanned aerial vehicle and the use of tear gas. Suspect in custody. Neighborhood safe. pic.twitter.com/Ji5jv2BPgm

Deputies and a sheriff’s crisis team were trying to negotiate to get the female suspect to comply with authorities, the Sheriff’s Department said, adding that she was now wanted for hit-and-run involving multiple vehicles and a deputy vehicle.

The woman was eventually arrested after the deployment of a drone, or an “unmanned aerial vehicle,” and the use of tear gas.

“Nobody knew the child was in the car,” Lt. Todd Knight of the Sheriff’s Department later said. “[There were] multiple efforts to discuss it with the suspect at the time.”

Chino resident Brian Avalos says he was on his way home when his Volkswagen was struck, injuring him.

“In split seconds, she came flying down, hit me and hit another car besides me,” Avalos said.