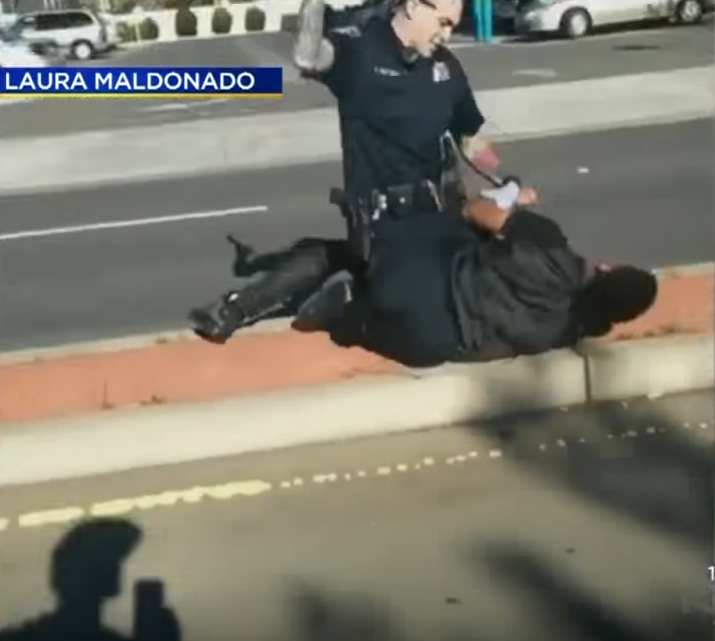 What is being described as a “brutal takedown” by police caught on video is drawing criticism from witnesses who said the officer went too far.

The encounter occurred Friday afternoon when police responded to a 911 call claiming a man was acting “crazy” at a gas station in Vallejo, California, CBS San Francisco reports.

The first arriving officer chased the suspect for several minutes until the suspect finally stopped and sat down in the middle of the street.  Unfortunately, stopping did not mean that he was “giving up.”

The officer attempted to gain control of the suspect on the ground and tried to place him in handcuffs, but the suspect continued to struggle.

The video shows the officer using body strikes and his flashlight to areas of the suspect’s body that would not significantly injure the suspect.

The suspect continues to struggle and says “I am God, I am God.”

The crowd and subsequent witnesses to the local media that claimed police brutality are continued examples of why some in our society will never understand why police use the force and techniques that they do in tense situations that could get them killed in an instance.

While I admit, to a novice, the video can be troubling, I see nothing with the contact of the suspect that is remotely close to excessive force.  The police officer arrives to a 911 call of a man acting “crazy” and then runs from the officer.  Just because the man stops, the officer has no idea what he is about to encounter.

He does know some things.  The man was acting in a way that solicited a 911 call and the man ran from police.  When the officer caught up to the suspect, he did not surrender but rather kept struggling and moving his hands about.  If you don’t think this is a problem for the officer, try subduing anyone, including a small child, that is waving their hands around in defiance.  Getting anyone under control in that matter will not look pretty and that’s not even taken into consideration someone acting “crazy” and running from  cops.

In short, while untrained witnesses may see some innocent person surrendering to law enforcement, there is no reason the officer in foot pursuit of the suspect should believe that.

The hands are the problems and until the suspect is handcuffed, no officer should back down at this point.  Now, the suspect could have easily rolled on his stomach and placed his hands behind his back to be handcuffed but he doesn’t so what options does the officer have in closed quarters with a man struggling with his hands moving?

The only option, as I see it, is exactly what the officer does.  He uses strikes to the body in areas of the body that would not severely injure the suspect but it is designed for pain compliance to get the suspect into custody.

The techniques are how we are trained and are much less invasive than TASER or OC Spray.  We simply don’t see the officer doing things that could significantly damage the suspect and in fact the strikes were not even of a hard nature but rather to get compliance rather than injure.

Nathan Mendes is an Arrest/Control Instructor and co-founder of the Law Enforcement Combative Course taught across the country.  He says that “it is easy for anyone to jump to conclusions about what they see in the video.” Mendes related that “like most people I am also watching it from the comfort of my own home.  I was not involved in a foot pursuit or a struggle with the suspect in the median of a busy road; all the while having a crowd surround me.”

Mendes told us that based on what he sees from the video, “the officer used a reasonable amount of force to gain control of the suspect.  The use of striking as a means of distracting the suspect and gaining compliance through pain is consistent with modern police training.  The officer also utilized top control of the suspect to prevent him from escaping and risking both parties from being struck by a passing vehicle.  In this instance, compliance must be gained quickly to prevent further injury to either party.”

Yes, what is seen in camera may look bad and it may even look “brutal” as some witnesses said, but what the officer uses are techniques that are absolutely appropriate for the situation and trained in every police academy in this country.

No one ever said that police use of force would look pretty and I can guarantee you that running after a man claiming to be God that then struggles is the last thing this police officer wanted to do on this shift.

I don’t understand everything that medical doctors do and sometimes they do things that simply don’t look right to me but I don’t question it because I have no training in their techniques.  Law enforcement will never be given this kind of latitude and while I have no problem with citizens questioning our actions, there should be some understanding, in most cases, that what the citizen is watching is through a lens that is untrained to make specific determinations of what they are seeing.

In this case, the officer will be cleared because what he did was designed to take the suspect into custody with the most appropriate amount of force in that particular situation.  The officer did just that and the suspect retained no injuries.

Those can be difficult concepts for the layman to understand and while it would be my hope that our citizens would try, that simply will not be the case with everyone.