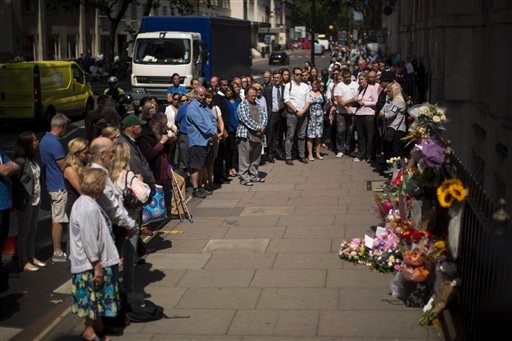 LONDON (AP) — Britons paused in silence, laid flowers and lit candles Tuesday to mark the 10th anniversary of suicide bombings on London's transit system in the worst terror attack on British soil and a day of pain seared into London's collective memory.

Four British men inspired by al-Qaida blew themselves up on three London subway trains and a bus during the morning rush hour on July 7, 2005, killing 52 commuters and injuring more than 700. The memory of that morning remains raw in this country of 64 million.

Solemn ceremonies were held throughout the capital, starting at the memorial in London's Hyde Park devoted to the victims. Prime Minister David Cameron and London Mayor Boris Johnson walked through the memorial's 52 pillars — one for each victim — to lay wreaths.

At 8:50 a.m., the moment the attacks began, the park fell silent. Families of victims clutched flowers. Some in the crowd bowed their heads.

"(The ceremony) drew me back to the very same day, when I experienced the whole traumatic event being down there in the Piccadilly line, hearing those screams, people banging on the carriage," she said. "And then, as I was watching the wreath being laid, I came back to 2015 and I thought 'Well, I am alive, thank God I'm alive.' But unfortunately, we've lost 52 lives."

The families organized a service of their own later in the day, a chance for them to remember in a way of their choosing — with music, personal comments and a cup of tea. Prince William asked the families if he could attend, and sat quietly in the front row in solidarity with their grief.

The enduring pain of the day was evident in the tears of survivor Emma Craig, who was only 14 in 2005 when she was on her way to a work experience trip to a legal firm in east London.

"All of us lost our innocence on that day, our naivety, the thought that 'something like that could never happen to me' or even to London," she said.

Trembling, she offered contrast in a day of speeches etched with defiance, delivering a harder truth. She said that while people will say "terrorism won't break us," Craig knew only too well that it isn't so simple.

"The fact is it may not have broken London, but it did break some of us," she said.

The attack occurred two years after Britain took part in the U.S.-led invasion of Iraq. But former Prime Minister Tony Blair, the nation's leader at the time of the bombings, said Tuesday that terrorism was "a global problem" that affected countries regardless of their involvement in the war in Iraq.

Across the city, survivors, transport staff and emergency workers laid flowers at the sites of the four bombings. Flower petals rained from the dome of St. Paul's Cathedral during a service featuring the first people to respond to the bombed sites. Londoners heeded a call to walk part of the way to work in memory of the day 10 years ago when the city's transit network stopped.

At King's Cross and other Underground stations, the trundle of luggage wheels stopped as staff and passengers paused for a moment of silence at 11:30 a.m.

Among them were paramedics David Tompkins and Drew McRae, some of the first crews to reach the bombed Piccadilly Line train where 26 people were killed. McRae remembered the eerie silence, while Tompkins recalled the "unbearable" heat.

"And hopefully nothing ever will again," added McRae.

Cameron said the slayings last month of 30 British tourists in Tunisia was a reminder that threats remain real and deadly. The gun rampage in the Tunisian resort of Sousse was the deadliest attack on Britons since the 7/7 bombings.

Despite the national flavor of the ceremonies, in many ways the day was so personal for so many.

Relatives laid yellow gerbera flowers, which are said to symbolize innocence. Several family members leaned over to touch the name of a loved one engraved on a plaque at the base of the memorial.

"Today has actually sealed it for me to say, 'goodbye my love. You are never coming back but I know you are alive in my heart,'" she said. "So be, but fly angel. And leave before we meet again."

Jill Lawless contributed to this story.

This story has been corrected to show that there are 52 pillars, not wreaths.