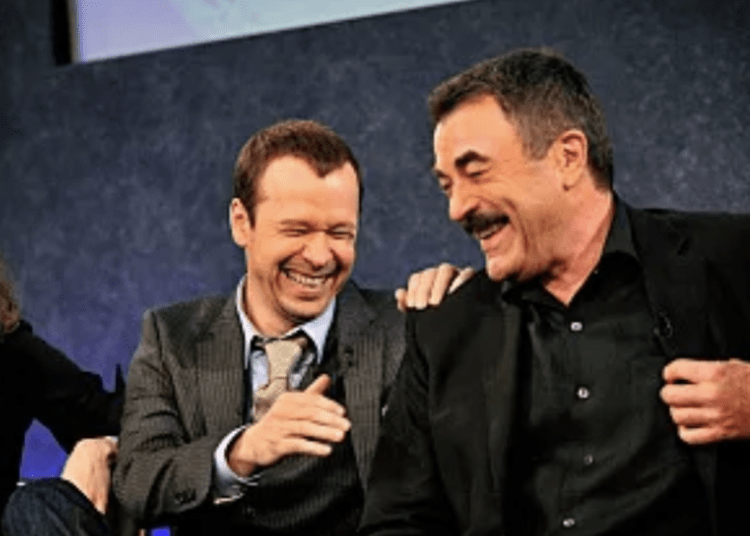 Donnie Wahlberg and Tom Selleck on the set of Blue Bloods, 2013. (TVFANATIC.com)

Actor Tom Selleck tipped a restaurant server $2,020 on a $204.68 tab at the Italian restaurant Elio in New York City. The Blue Bloods star’s generosity was part of a “2020 Tip Challenge” that has become a growing trend in what has been a tumultuous year, Breitbart reported.

“I found out that my TV Dad #TomSelleck has generously accepted the #2020TipChallenge at Elios Upper East Side!” tweeted actor and Selleck’s Blue Bloods co-star Donnie Wahlberg. “I didn’t start it but I’m proud to be part of it. To those who gave even the smallest extra amount this year — THANK YOU,” Wahlberg added, along with the hashtag, “spread love and love will spread.”

I found out that my TV Dad #TomSelleck has generously accepted the #2020TipChallenge at Elios Upper East Side!

I didn’t start it but I’m proud to be part of it. To those who gave even the smallest extra amount this year — THANK YOU.#spreadloveandlovewillspread pic.twitter.com/1NcEswVbsO

In his tweet, Wahlberg included a photo of the receipt and a note that Selleck left for the server, which read, “I am honoring my friend Donnie Wahlberg’s tip challenge with my sincere hope for a better 2020.”

Wahlberg told People that Selleck, who dined at the Italian restaurant in November, didn’t tell anyone that he had tipped $2,020 for weeks. “Tom never mentioned it to me,” Wahlberg said. “We’ve done three [Blue Bloods] dinner scenes since he did it and he never told me.”

Selleck told People in April that he is “a fairly private person.”

Back in January, Wahlberg and his wife reportedly kicked off the new year by leaving a $2,020 tip for an IHOP server in their hometown of St. Charles, Illinois.

“[Donnie Wahlberg] starting 2020 off like the amazing man he is,” tweeted Wahlberg’s wife in January, along with a photo of the receipt, and the hashtags, “#ihop” and “#2020tipchallenge.”

Wahlberg later repeated his act of kindness in November by leaving his server at Marshland restaurant in Plymouth, Massachusetts, a $2,020 tip on a $35.27 bill, according to Breitbart.

“A very special thank you to our friend [Donnie Wahlberg]! When asked about it all he said was ‘who’s up next?!’” wrote the restaurant on Instagram.

“Donnie has been here before in the past and he always asks for [Denise],” said Marshland restaurant owner Marty Finch to People of Wahlberg’s November tip. “He had his normal order: steak tips with some grilled asparagus and some poached eggs. She always knows what he wants.”

“When he left he just said, ‘Denise, you’re all set. The payment is on the table,’” added Finch. “She always says he’s a very good tipper anyway but her jaw dropped, to say the least, when she saw that amount of tip.”