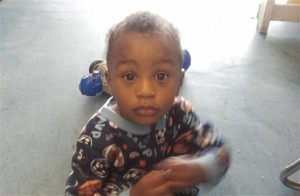 COLUMBIA, S.C. (AP) — Police looking for a South Carolina toddler missing since Thanksgiving have found a shovel and what appear to be bloody clothes and blankets in his mother's Columbia home and in her car, according to search warrants.

Authorities went to the home of Zinah Jennings earlier this month after her stepfather told police he had seen her in the backyard with a shovel around the time Amir Jennings disappeared.

Using a cadaver dog to search the house near downtown Columbia, investigators found a shovel. A dog was also used to search Jennings' car, where investigators say they found blankets and clothes with stains that appear to be blood.

Investigators said the items were being analyzed by state police. Also Tuesday, police said a $10,000 reward was being offered for information leading to the toddler's return.

Police also obtained surveillance video and records of Jennings' computer use at the Richland County Public Library after receiving a tip Jan. 5 that the woman was a frequent visitor there. Warrants show authorities also collected a DNA swab from Jennings' cheek and her medical records from a visit to the hospital after a Christmas Eve car wreck.

Jennings has been jailed since Dec. 30 after police said she repeatedly lied to them about where her son was. Last week, the boy's grandmother pleaded with the public to help authorities find the toddler she described as a happy, gap-toothed child who enjoys nursery rhymes and responds to "Mir Mir" and "AJ." He was about 18 months old when he was last seen.

Jocelyn Jennings Nelson reported her daughter missing in early December, saying she was worried about the boy and Jennings, who she said struggled with depression and started acting erratically after her son's birth.

Police began looking for the 22-year-old mother but said they also considered that relatives said she had repeatedly left town for days at a time, taking her son to visit friends in neighboring states.

Several weeks later, on Christmas Eve, police investigating a one-car wreck just blocks from Jennings' home were surprised to find the driver was the young mother they'd been looking for. Interviewed at a hospital, Jennings gave conflicting statements about where the boy was, according to police, first telling authorities she didn't have any children before saying Amir was with friends and family in cities from Atlanta to Charlotte, N.C.

After several dead ends, the mother was arrested and charged with lying to police. Authorities say they have stepped up their efforts to find the boy and are hoping a tip line will yield some information.

Jennings also took investigators to a Columbia apartment complex where she said she had dropped off her son, later saying she didn't know the apartment number or location within the complex, according to search warrants.

Kinnard can be reached at http://twitter.com/MegKinnardAP .