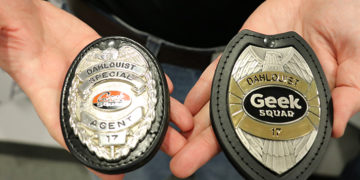 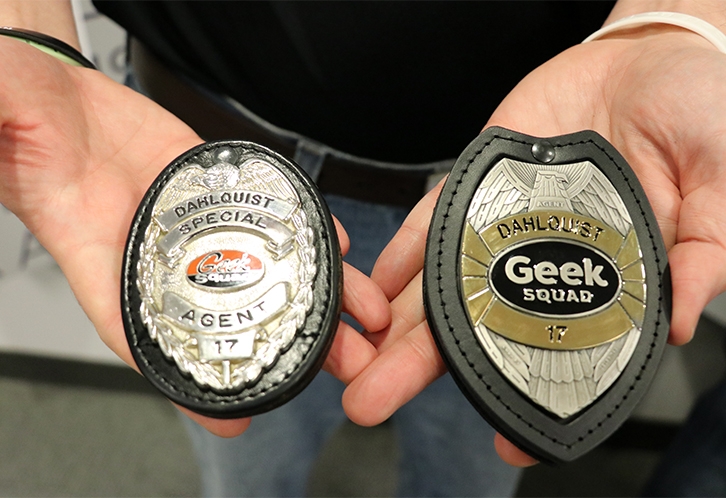 Best Buy Employees in Tulsa (OK) were ordered to remove their badges on Thursday after violence erupted in cities across America in the wake of the George Floyd death in Minneapolis.

While we do not know if this was a corporate decision, employees of the “Geek Squad,” a team dedicated to fixing computers, began reporting the policy on social media.

The badges list “agent” and are commonly given to employees to commemorate five, 10, 15, 20 and 25 years of service.

One employee said that he was instructed to immediately remove the badge because Best Buy feared for their safety if someone thought they were a law enforcement officer.

We have reached out to corporate and are awaiting a response.

Best Buy posted the following message on their corporate blog:

Another black man in America died senselessly on Monday, and it happened only miles from where many of us live. As cars and people passed by, unaware that a man was struggling to breathe as another’s knee was on his neck, our state and country witnessed yet another example of how the life of an African American man, woman, boy or girl is fundamentally different from their white friends, neighbors and colleagues.

All this happened on the same day another black man, this time in New York City, was threatened by a white woman who said she would call the police on him when he requested she leash her dog, as required by city ordinance. She made that threat — and carried through on it — almost certainly knowing it would strike fear in the heart of any African American adult. She weaponized racism, and the whole world was able to watch.

We write about these two events — and could certainly mention many more, including a young African American man chased and gunned down while jogging in southern Georgia — not because most of us know what this fear must be like. We are as a group, by and large, not people of color. We write this not because most of us have known anyone personally in a situation like this. Thankfully, most of us do not. We write this because it could have been any one of our friends or colleagues at Best Buy, or in our personal lives, lying on the ground, struggling to breathe or filming someone as they threatened us.

This is the heart of the issue. Every time we see this kind of tragedy it can be hard not to feel emotional, not just for the human being affected or their family, but for the colleagues we know who could be — and have been — victims of overt, hostile and even dangerous racism. If we allow ourselves, it is not hard to imagine them lying on the ground begging to breathe or bravely staring racism in the eye as they walk through a park.

If we permit it, we can — and we believe we should — see the moment for what it is: a horrific tragedy in Minneapolis or one in the making in New York City. But then we must take the next step, moving beyond it happening to a stranger to the possibility of it happening to someone we call a friend. Only then, in our view, do we begin to internalize how terrifying life can be for the black father or mother who must regularly remind their children what to do when facing a situation like this. Or what it must feel like for those same parents to know that they, too, could be facing it themselves.

In keeping with our deep commitment to Diversity and Inclusion, the company will continue to invest resources and time on this topic, even in the face of the COVID-19 pandemic.