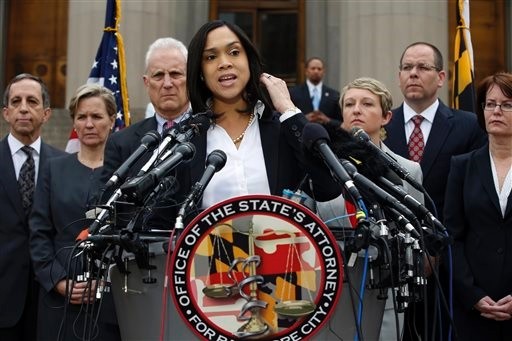 Prosecutors in the trial of Baltimore police officer Caesar Goodson over the death of Freddie Gray had a rough time yesterday as the state’s star witness reportedly “crumbled” under cross examination. From the Guardian:

Prosecutors seeking murder charges over Freddie Gray’s death rested their case against Caesar Goodson on Wednesday with an expert witness who crumbled under cross examination. His testimony was the latest of several blows in the trial that experts say is prosecutors’ best shot at getting a conviction for Gray’s death.

After failing to win in the first two trials, the case against Caesar Goodson is especially important for Marilyn Mosby, the embattled state’s attorney.

On the witness stand for the prosecution was former police commander Stanford O’Neill Franklin, who was supposed to testify that Goodson — who was the driver of the van — had given Gray a “rough ride,” leading to his death.

Franklin, however, could not confirm that a “rough ride” happened at all.

@RectorSun stated that “this cross examination of rough ride experts is…um…not going well for the prosecution.”

Under cross examination, Franklin said that when he reviewed the video he saw no “unexpected acceleration….deceleration…turns…”

His testimony continued,  “Fraling: In your expert opinion, did Goodson give Gray a rough ride?
Franklin: “I can’t say for sure.”