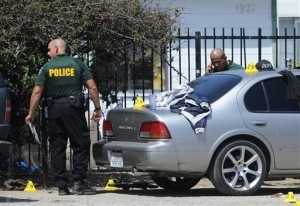 SAN BERNARDINO, Calif. (AP) — Prosecutors say three men have been charged in California with the attempted murder of a policeman even though they didn't pull the trigger.

The San Bernardino County district attorney's office said Tuesday that the men were with the gunman and knew about an AK-47 he fired during the confrontation. They're also charged with possession of an assault rifle and could life in prison if convicted.

Officer Gabriel Garcia and his rookie partner were approaching a group of people last Friday when one man opened fire with a handgun and the assault rifle.

Garcia was hit once in the head. His partner killed the gunman, identified as Alex Alvarado.

Garcia remains in critical condition in a medical induced coma. Prosecutors say the three men could face murder charges if he dies.