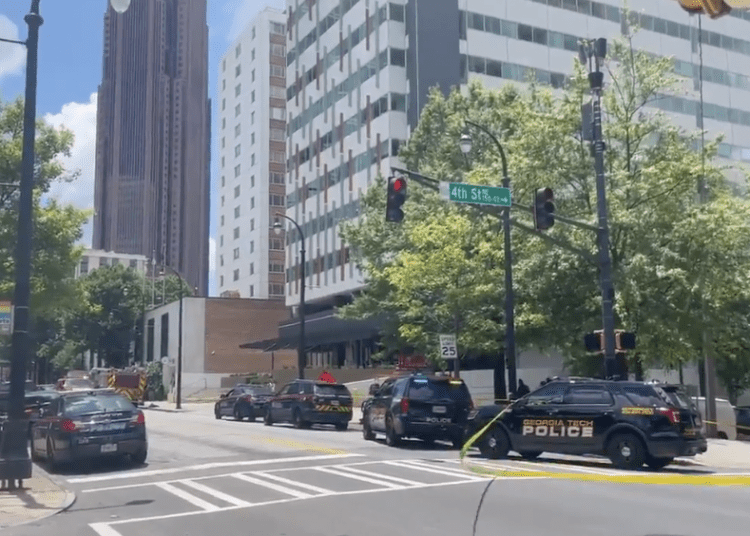 ATLANTA — An Atlanta police officer was wounded and the suspect is believed to be dead Wednesday afternoon, according to local reports.

The Atlanta Police Department said one of their officers was shot at a Midtown apartment building. Officers were responding to a call of a gunshot victim inside an apartment at the location, WSB-TV reported.

“As soon as the elevator door opened they were met with gunfire, immediately,” Atlanta Deputy Police Chief Charles Hampton Jr. said. “Officers were able to return fire, and we believe that one suspect was fatally struck.”

The male victim in the original shooting was taken to a nearby hospital and is reportedly in stable condition. The wounded officer was carried downstairs and also rushed to the hospital.

According to Chief Rodney Bryant, the officer has been stabilized and is able to speak to his family.

“It is only through their training and by the grace of God that these officers did not come upon a more tragic situation,” Bryant said during an afternoon news conference, WSB-TV reported.

The wounded officer was shot once in the face, according to The Atlanta Journal-Constitution. The news outlet also reported the suspect was killed in the exchange of gunfire with police.

Lance Terrell lives in the apartment building where the shootings occurred.

“I saw a bunch of people looking, like, shocked. I looked over to see a police officer standing next to an open elevator and I saw blood all over it and a couple gun clips,” Terrell said.

I’m on scene of a police officer shot in the middle of Peachtree street in midtown at 7th street near the Fox Theater pic.twitter.com/hzf9Ecur3Y

The Georgia Bureau of Investigation has been summoned to assist with the investigation.

Grady Memorial Hospital has become the gathering site for several officers as they want to be present to support the wounded officer and his family.

Chief Bryant confirmed the injured officer was talking to his fellow investigators to help them figure out how the attack unfolded.

Emotional scene right now at Grady. Atlanta Police officers comforting one another. We are here standing by for an update on the officer who was shot’s condition pic.twitter.com/1XmLIUt6qh

“These officers were ambushed,” Atlanta Mayor Keisha Lance Bottoms said. “While so many of us run from danger, our officers run into danger. And that is what happened today.”

“Even with one of the officers being struck, they quickly responded and the courage displayed … really I don’t have the words to describe,” Bottoms said, according to WSB-TV.

APD has not released the name of the wounded officer or the deceased suspect at the time of publication.