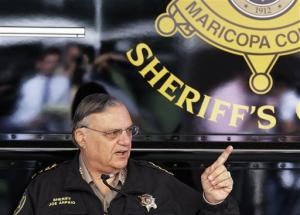 Arizona police officers should expect opponents of a new immigration law to videotape their actions to try to prove they're racially profiling Hispanics, according to a training video released Thursday.

The video from Arizona's police licensing board is designed to teach officers how to determine when they should ask a person for proof they're in the country legally.

Officers are told they could be fired for considering someone's race when enforcing laws, except as part of a suspect's description. For example, if a bank robber is described as a Hispanic ale, police can use that detail in deciding whether to question a person about the robbery _ but not about their immigration status.

Arizona's law, sparked by anger over a surging population of illegal immigrants in the border state, generally requires officers enforcing another law to question a person's immigration status if there's a reasonable suspicion that the person is in the country illegally.

It restricts the use of race, color or national origin as the basis for triggering immigration questions. But civil rights groups and some police officials argue that officers will still assume that illegal immigrants look Hispanic.

Officials say officers should expect that their actions will be videotaped and their reports will be scrutinized by activists who don't think authorities can enforce the law without racially profiling Hispanics.

Arizona's 460,000 illegal immigrants are almost all Hispanic. Yet Arizona also has nearly 2 million Hispanics who are U.S. citizens or legal residents, about 30 percent of the state's population.

In the training video, an expert advises officers to ask themselves whether they'd reach the same conclusion about someone's immigration status if the subject were white or black.

The video and supporting paperwork will be sent to all 170 Arizona police agencies.

Police bosses will decide the best way to teach their forces. There is no requirement that all 15,000 Arizona police officers complete the training before the law takes effect July 29.

Gov. Jan Brewer ordered the Arizona Peace Officer Standards and Training Board to develop the training when she signed the law April 23.

Opponents have challenged the measure as unconstitutional and have asked that a federal court block it from taking effect. U.S. District Judge Susan Bolton plans to hear arguments on the request later this month.

President Barack Obama on Thursday called the law an understandable byproduct of public frustration with the government's inability to tighten the system, but also said it is ill-conceived, divisive and would put undue pressure on local authorities.

The law was passed in part with the lobbying muscle of unions representing rank-and-file police officers who argued that they should be allowed to arrest illegal immigrants they come across.

It was opposed by police bosses who worried it would be expensive to implement and would destroy the trust they've developed in Hispanic neighborhoods.