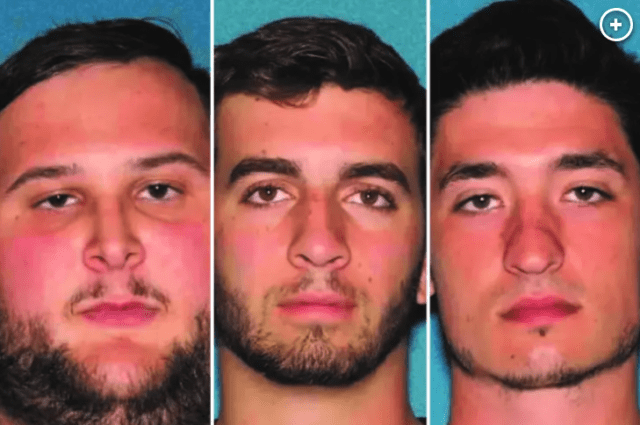 Andrew Gallucci, left, Richard Gathy and Ronald Hondo are accused of tying up a woman and sexually assaulting her. (Monmouth County Prosecutor's Office)

MONMOUTH COUNTY, N.J. – Three New Jersey men are accused of binding a woman they met at a bar and “repeatedly” sexually assaulting her, according to the Monmouth County Prosecutor’s office.

The criminal defendants have been identified as Andrew Gallucci, Richard Gathy and Ronald Hondo, all 24. They reportedly met the victim at a bar in Manalapan Township on April 2, prosecutors said.

An investigation by members of the Prosecutor’s Office’s Special Victims Bureau and the Marlboro Township Police Department revealed that on the night of Saturday, April 2, the three defendants gathered at a Manalapan bar, where they met the victim, an adult female, for the first time. Later on that night, the investigation revealed, the defendants brought the victim back to Gallucci’s residence, where they allegedly restrained her against her will in a bedroom and repeatedly sexually assaulted her.

All three men were arrested April 8 and subsequently booked at the Monmouth County Correctional Institution, the New York Post reported.

Prosecutor Lori Linskey referred to the reported sexual assault as a “predatory attack.”

“This was a disturbingly coordinated and predatory attack,” Linskey said. “We commend the courage of the victim in coming forward to report what happened to her, and we look forward to bringing those responsible to justice.”