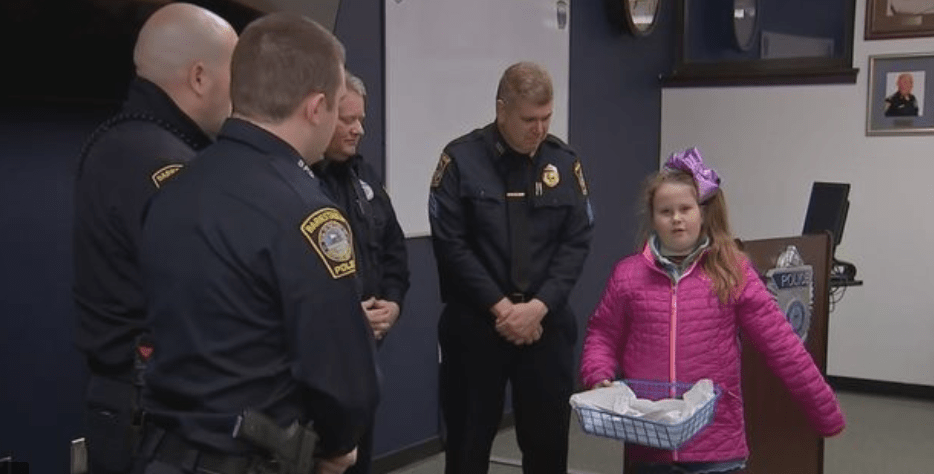 An 8-year-old Mashpee girl says she’s sharing “protection from above” with police officers all over the Cape by giving out medals that depict Saint Michael, the patron saint of law enforcement.

Boston 25 reported that Caoimhe Assad appeared very comfortable addressing a room full of police officers Thursday, likely because she’s had a lot of practice coming from a family of officers.

Her father is a sergeant in Mashpee, while her grandfather is a K9 officer with the Barnstable Sheriff’s Office.

Assad has been presenting St. Michael medals to officers all over the Cape, hoping the token will give those with dangerous jobs protection.

The 8-year-old’s mother said she’s doing it to honor two officers who were shot and killed in the line of duty last year: Sergeant Michael Chesna from Weymouth and Sergeant Sean Gannon from Yarmouth.

Assad held a bake sale at her church and collected bottles and cans to pay for the medals.

People have also been sending her donations, and she’s already handed out 200 medals. She plans to gift 1,000.

Assad plans to bring the medals to every police department on the Cape, and if she has any money left over from her fundraising, she plans to donate it to the care of retired police dogs on the cape.

Share and speak up for justice, law & order...
Tags: medalsNews