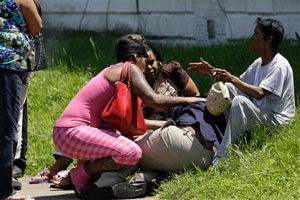 As police investigated with a crowd of people and reporters gathering at the scene, gunfire again rang out and onlookers dove for cover.

Two women were arguing and one fired at the other, killing her, police said. After the shots rang out, police ran down the street, and one officer took a shotgun from his car and ran behind a house where police had been investigating. Officers shot and wounded the shooter, police said.

Two people were placed in handcuffs.

The wounded woman was taken to University of Louisville Hospital where the two others injured were being treated, one in critical condition, police said.

Police had not released any names of the victims or a motive for the first shooting.

Hours later, the crowd had mostly dispersed. The bodies remained covered with sheets or blocked from view by protective barriers.

Police said the man who suffered the less serious injuries made his way about eight blocks from the scene and got to the hospital from there.