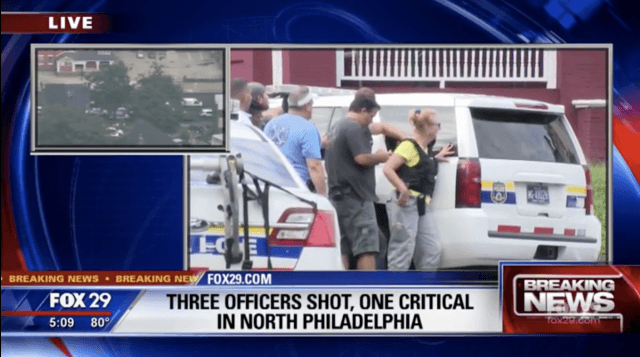 PHILADELPHIA – At least five Philadelphia police officers were wounded, at least one reportedly shot in the head, in an ongoing shootout in the city’s Nicetown neighborhood on Wednesday afternoon.

Two officers were rushed to Temple University Hospital. One officer was in critical condition while the other’s condition remained unknown, officials told Fox 29.

Two other officers were taken to Einstein Hospital, at least one of them was shot in the arm but both are in stable condition and are alert and talking.

The situation was being described as an active shooting scene that began around 4:30 p.m.

FOX 29’s Jeff Cole reports there are two narcotics officers inside the home with a shooter.

Video footage of the scene showed a massive police presence in the neighborhood as dozens of responding police officers and police cars blocked off the streets surrounding 15th and Butler streets, crouching behind cars, many with their guns drawn, in search of a possible gunman, according to reports by WCAU.

One officer appeared injured and was taken away in a police car. Video also showed two other officers carrying a man and putting them in the back of a police car, according to reports by the Associated Press.

This is a developing story.